The previous article left us at the point where we could display tiles without wasting time drawing any of these out of the screen.

I will now explain the next step, which is to be more efficient at drawing the tiles.

Drawing tiles one by one

The code examples I gave in the previous articles were relying on a semi mythical function:

In almost every case3 we end-up with something like that: 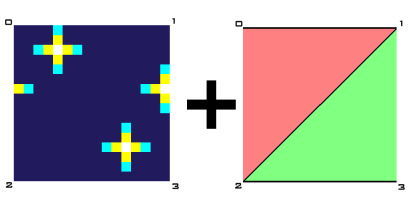 The OpenGL equivalent would be:

By doing that for each tile with the correct texture reference and screen position we eventually end up with a screen on which our tilemap is displayed.

Each of these drawing commands is called a Draw Call.

This approach has the merit of being simple to implement and easy to understand, but from a CPU and GPU point of view is far from being optimal because it generates many context changes and uses quite many draw calls.

You have to imagine that modern hardware is like a high speed train: When it has been going on for a while it's pretty efficient, but each stop at a station has a serious impact on the train's average speed.

When you are drawing your tiles one by one you are more or less doing the same thing as stopping the train. The solution for that is to try to render as many tiles as possible in one single operation.

The general idea is that the less draw calls you perform, the higher the performance.

The main problem here is that you cannot change textures during drawing, so you need to have access to all the tiles graphics in one single texture: This is called a Texture Atlas (also called a texture dictionary).

If you remember our previous Space Station example, the texture atlas would look like that: 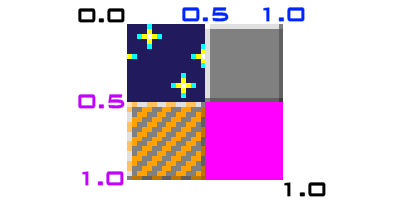 In my earlier example I gave sets of texture coordinates: They were all set to either 0 or 1. The reason was simply that we were using the whole surface of the image as our source texture for our tile.
When multiple images are packed together in a texture atlas, it become necessary to use fractional values to access each individual image in the larger texture:

With all our images stored in one single texture it is now possible to draw the whole tilemap in much less DrawCalls, and ideally only one should be sufficient.

Recent hardware is able to perform complex operations using shaders of many kinds, and are able to handle sophisticated forms of indexing in order to describe the geometry to render efficiently.
Earlier, the most efficient way to reduce the number of draw calls was to use triangle stripping.

I could just skip the explanation, but I believe that it does not hurt to know the history of things, and who knows: you may have the opportunity to use hardware on which this knowledge will come in handy.

So, how does stripping works?

Well, the concept is very simple:
Could really not be simpler.

So, let's go back to our space station. Do you think you could generate a strip for this tilemap?

Ok, I will admit that the solution may not be obvious, and as often it generally helps to try to solve the problem by small pieces.

If the source texture had all the right images at the right location we could just have done this, starting from the top left and proceed to the top right of the tilemap:

This is a strip made of 16 triangles drawing the 8 top tiles in one single operation.

Using OpenGL this would give something similar5 to this:


The problem is that this does not work when we use a texture atlas: It works for the first tile, but when we start drawing the second tile we are having problems with the texture coordinates:
This means that sharing the vertices 3 and 20 will not be possible due to different UV6 values.

To solve this problem we will have to use Degenerate Triangles7.

A degenerate triangle is simply speaking a triangle without area. To create them all you need to do is to give the same coordinate twice, this will "flatten" the triangle and the result is that nothing should be drawn.
These 'invisible' triangles can be used to reset the UVs to the values we want.


The trick is that since the two degenerate triangles are not actually visible, it is possible to set UVs that point to the new part of the texture atlas we want to use for the next tile.

That's a bit ugly, adding the degenerate triangles does reduce the interest of using triangle strips in first place, but it normally works.

I was planning to talk about index and vertex buffers as the second way to perform batching, but this article is already long enough and contains a lot to digest so I will introduce these in the next part.

The more technical it gets, the more risks I introduce some silly mistake, so please don't hesitate to signal any unclear or blatantly wrong statement!

1. API stands for Application Programming Interface, a set of functions you are allowed to use to perform various operations.↩
2. Homogeneous coordinates are standardized values in the -1 to +1 range.↩
3. I'm referring to modern hardware. Older machines did not have graphic cards and would use totally different ways to achieve the same result.↩
4. This is called a Triangle Strip, each added vertex defines a new triangle.↩
5. The texture coordinates should be between 0 and 1 and using fractional values, but that would make the example less readable↩
6. Remember, UV is the common name to describe texture coordinates.↩
7. Degenerate triangles may not be accepted by all graphic apis.↩