ACF and XCF
Tue 5th October 2021
Adeline Software
The ACF formatVersions and compatibility"Format" chunk"Palette" chunk"Frame" chunks Tile Correction Tile DecodingACF Extractor
Now that I've given some information about how the way levels were designed and scripted, time to talk about the Xtra 3D Motion1!

Let's start by the credits for the "Adeline Software Motion Compressor"2.

I also want to thank Didier Chanfray, who was Design Director on Time Commando, and now the actual owner of all the rights on the game, for having given me a formal authorization to enter into the details on how the game was made, including code sample, script examples, etc... necessary to explain how it all worked.

Each section ("Chunk") is made of 12 bytes: 8 bytes with the name of the chunk, and 4 bytes for the length:

Using this information it is possible to iterate over the entire file even if you don't know some of the chunks.

A basic ACF decoder, just looking to extract the images from the stream would just require knowledge of the following chunks:
There are many more chunks (NulChunk, FrameLen, SoundBuf, Recouvre, Camera, SAL_xxx, ...) but they contain additional data used by the game engine.

Some of these chunks are platform specific, and the format was somewhat altered to become more efficient on the slightly underpowered PSX console.

One important thing to to know, is that the format evolved over time, but unfortunately there are no version field in the format5, so some of the earlier demo releases and prototypes will result in corrupted output, or even crash of the decoder because of out of bound buffer accesses.

Badly decoded picture
I validated the code I'm sharing here6 on the ACF files available on the GOG PC version of Time Commando (released in July 1996), and I can definitely say it does crash on some earlier ACF files I had in my archives from earlier the same year (in April and May), but I don't have trace of what the changes were (we did not use source control versionning back in the days).

The Format chunk contains information about the size of the encoded images, framerate, etc... including which compressor was used.

If all you want is to extract the images, you just need to access width and height!

The main differences between XCF and ACF are statisticaly, internally the encoding is the same.


There are actually two of these, encoded in exactly the same way:

The two streams of data are separated for performance reasons. Some processors are not able to load unaligned data7, and when they can, this comes with some form of performance penalty.

By having to separate streams, we were able to optimize the code by making sure some of the data would always be properly aligned on a multiple of 4, thus being optimal on all the architectures we supported.

A typical example would be to load a 32 bit mask from the aligned stream, and some pixel color data from the unaligned one.

"KeyFrame" chunks contain complete pictures, which can be practical to use if you want to jump forward and backward in the video stream, while "DltFrame" require the previous picture content as a decoding source. 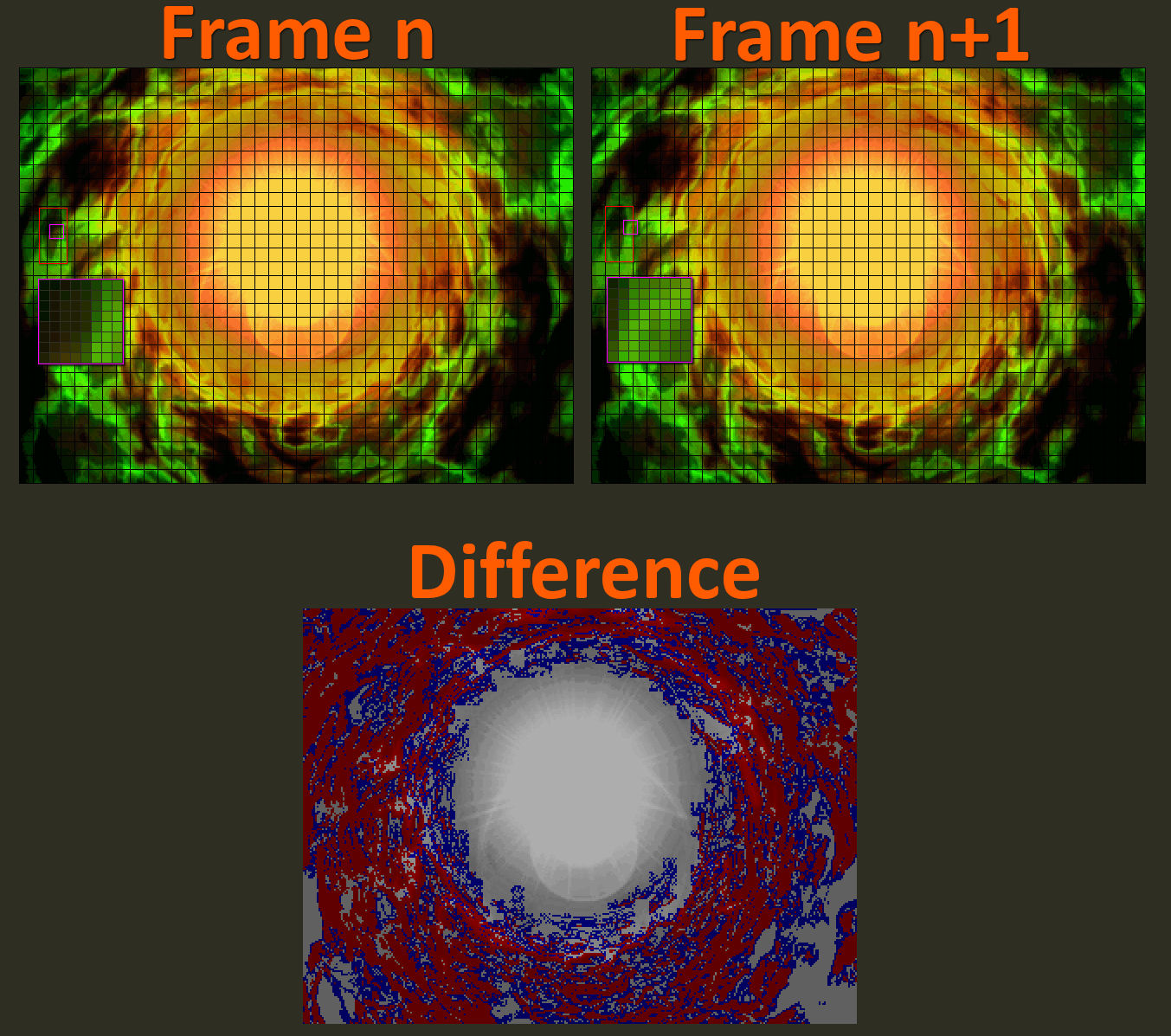 Delta Frame
As you can see on this picture of the tunnel, some parts of the image do not change at all (the gray areas on the difference view), and since the tunnel is slowly zooming, most of the content of the n+1 frame as just made of rearranged elements from the previous frame.

This is one of the reasons why the background moves relatively slowly: If it moved faster, it would be much harder to compress efficiently.

When starting the decoding process, we need to acquire pointers on all these sections, and also two pointers to the previously decoded image.

The compressed images are split into small tiles made of 8 by 8 pixels, and each of these tile is encoded using one of 64 different combinations of methods.

These methods contain two phases: The decoding phase, and the correction phase, and are defined in the opcode section.

I'm going to start by the correction part, because it's the simplest to explain.

At the core, any efficient compression method is destructive, which means the decoded version of the image is not identical to the original. The less differences there are, the better the quality, which is why we are using a post decoding correction.

All this does, is to "touch up" a few pixels on the tile to reduce the loss of quality.

We have three updates methods:
Update4 and Update8 are implemented the same way, using 6 bits for each pixel position, and one color byte for each pixel.


Update16 uses a single 64 bit mask to indicate which of the pixels are impacted, plus 16 bytes for the color of each of these pixels.

And that's all there is recording post decoding correction.

Ultimately there are 64 possible combinations of decoding and updating, but there are only 31 decoding methods, split in various categories:


Let see how these are used.

If you've not read the article about the Time Command palette I suggest you do it.

Basically in Time Commando, we have 256 colors, organized in 16 groups of 16 colors called "banks".

This is exploited by the ACF compressor which when able to detect when all the colors of a specific tile fit in the same bank, will just use 4 bits to indicate the color index instead of the full 8 bits.

These are only using data from the ACF file and do not require any data from the previous frame, as such they are the ones that can be used for the KeyFrames images.

The first group contains the very simple ways of filling a 8 by 8 pixels tile.
Can't do more simple that these two examples: Fetch one color and use it to colorize an area of the tile.

1 and 4 colors fill
The Raw decode follows the idea, but instead of just 1 or 4 colors, we get the entire set of 64 pixels colors that we can just copy directly, with the "bank" variants optimized for the cases where we have a limited range of colors.

Raw and Bank decode
The bit decode methods are similar to bitmap encoding on retro computers, like Atari ST, where you have a fixed palette with a certain number of colors, and you read a specific number of bits to find the color index.

1, 2 and 3 bit Tile decode
These next three are similar, but work on each of the 4x4 quadrants of the tile.

The Block Decode methods are designed to help with areas with large gradients with slow changes of colors. 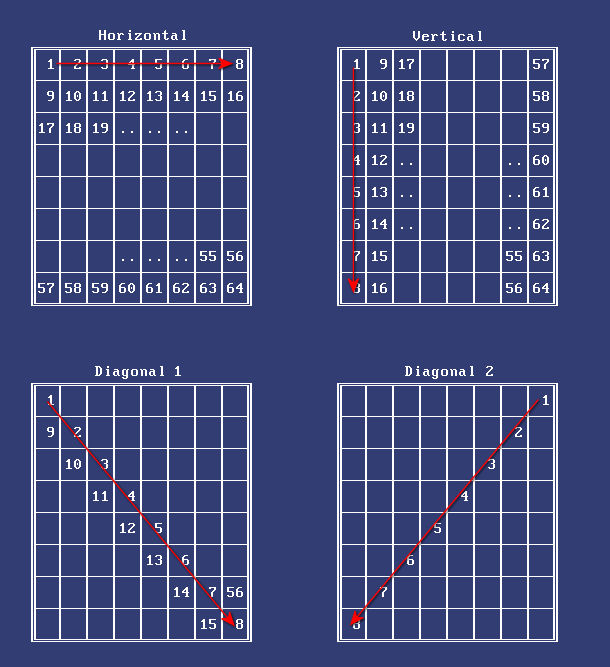 These use both data from the ACF file, and also use the previously decoded information available in the previous frame, and as such can only be used for Delta Frames images.

And that's about it really.

The first pass runs the block decode, the second pass do the pixel correction.

This article comes with a complete source code, rewritten by me.

It's obviously based on the original documentation and code, but it does not use any of the Adeline code, and only use standard C++17 functionalities.

So, here is the complete source code: ACF Extractor 1.0 (38 kilobytes)

It's only one single CPP file, that you should be able to compile with anything that supports C++178.

There are no command line parameters, basically the idea is that you need to compile and hack around to see what it does by tracing the code.

There's a big #if at the end that selects between a batch mode that scans a bunch of folders and exports PCX images in a target folder, and a second mode that only converts one specific video.

And that's really all there is.

There is no support for the extra rooms (SAL_xxxx chunks): This may happen at some point, but I've to admit it already has taken way more time than I have expected...

...also I've heard that some exciting things may be happening soon, so we will see how things go.

Feel free to ask questions, or point out bugs, the code is probably not "production quality", I was more aiming for understandability than anything else.

1. For some reason, somebody decided that 'video streaming' was not exciting enough, and they came up with this acronym for the technology.↩
2. The source code thanks Michel Royer who worked on Cyberia at Xatrix Entertainment↩
3. Hey, it's me!↩
4. Interchange File Format↩
5. Which I systematicaly do these days, it does not cost much and makes things so much easier↩
6. Jump to the end of the article if you are in a hurry↩
7. Like loading a 16 bit value at an odd address, or a 32 bit value on an address not multiple of four.↩
8. I only tested on Visual Studio 2019↩