Time Commando Marketing
Sat 1st May 2021
The postcardsShop advertisingDemo versionsPC Version Read-ME
Time Commando was released in July 1996, and since my old Time Commando web page only had small resolution pictures, I decided to make some new scans on fan's requests on my Youtube channel, a bit in advanced for the 25 years anniversary of the game release.

My idea is to post updated information the game, from how it was sold, to how it was made, possibly including some internal implementation details, but today let's start simply with the marketing information!

I'm not quite sure about who came back with the idea of having Stanley incorporated in black and white photos, or the concept of the "Time Commando" meal in a bag, but there it is, in all 2021 scan glory. 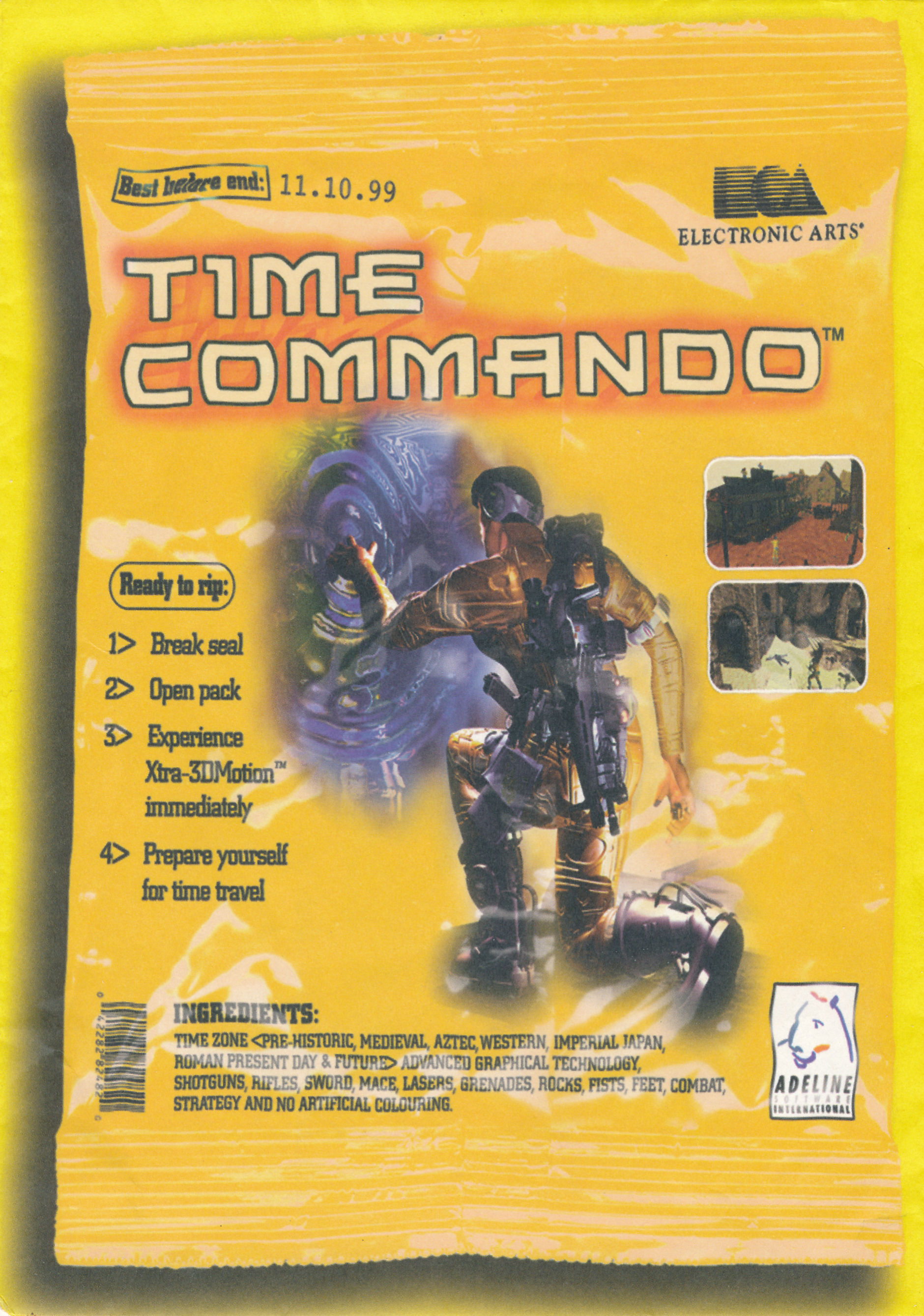 Front of the enveloppe containing the postcards 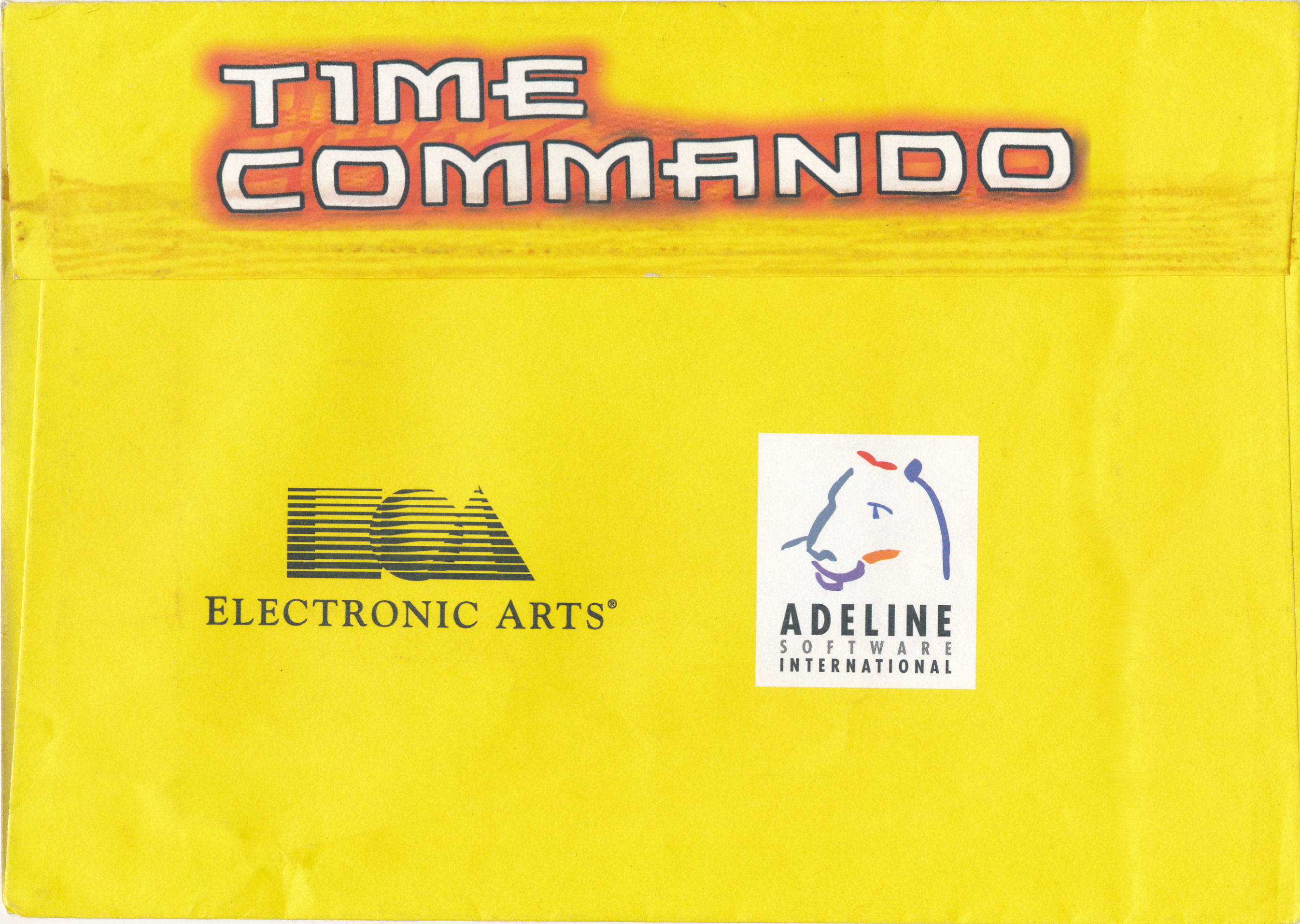 Back of the enveloppe
And here is the content, with the four postcards 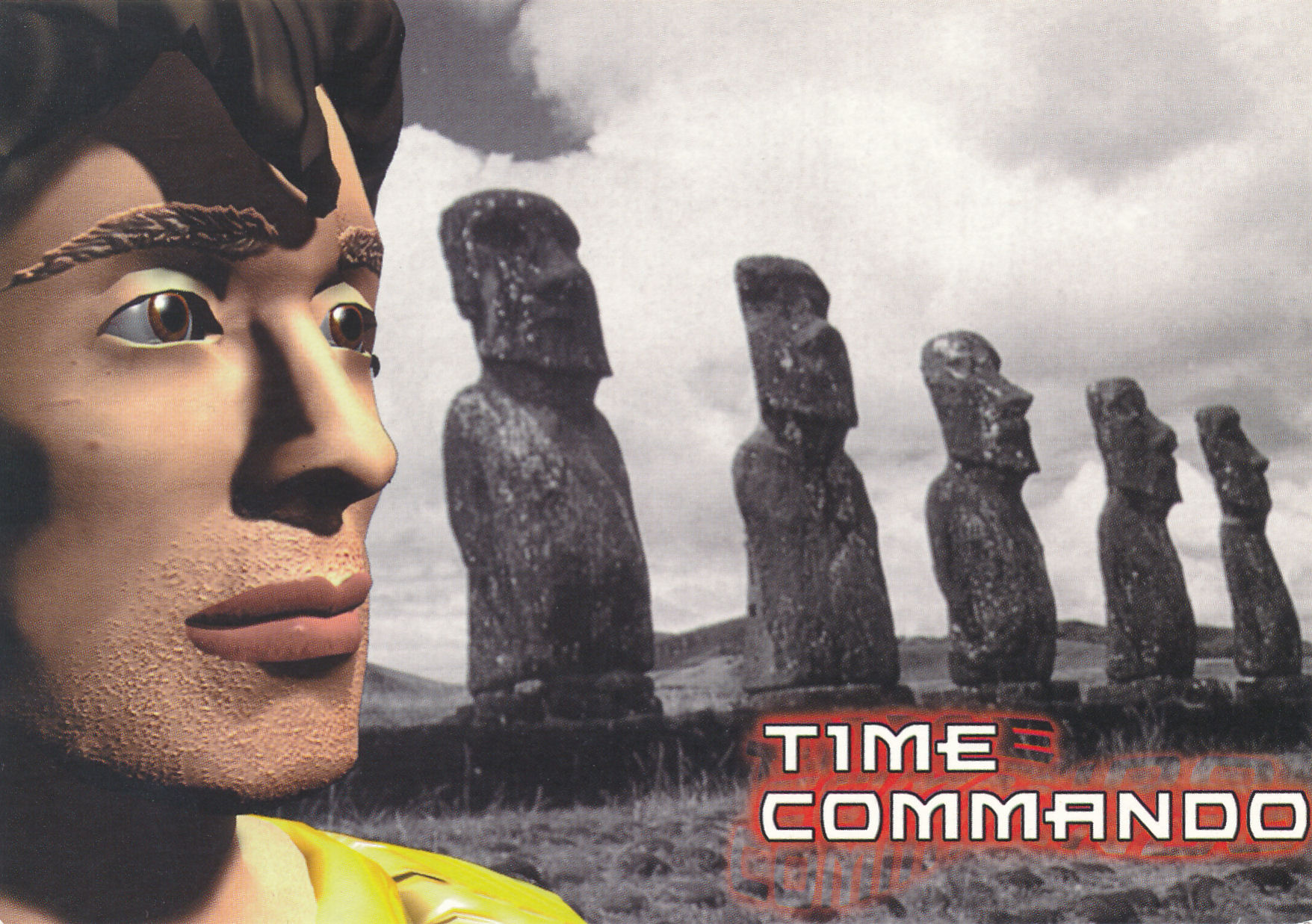 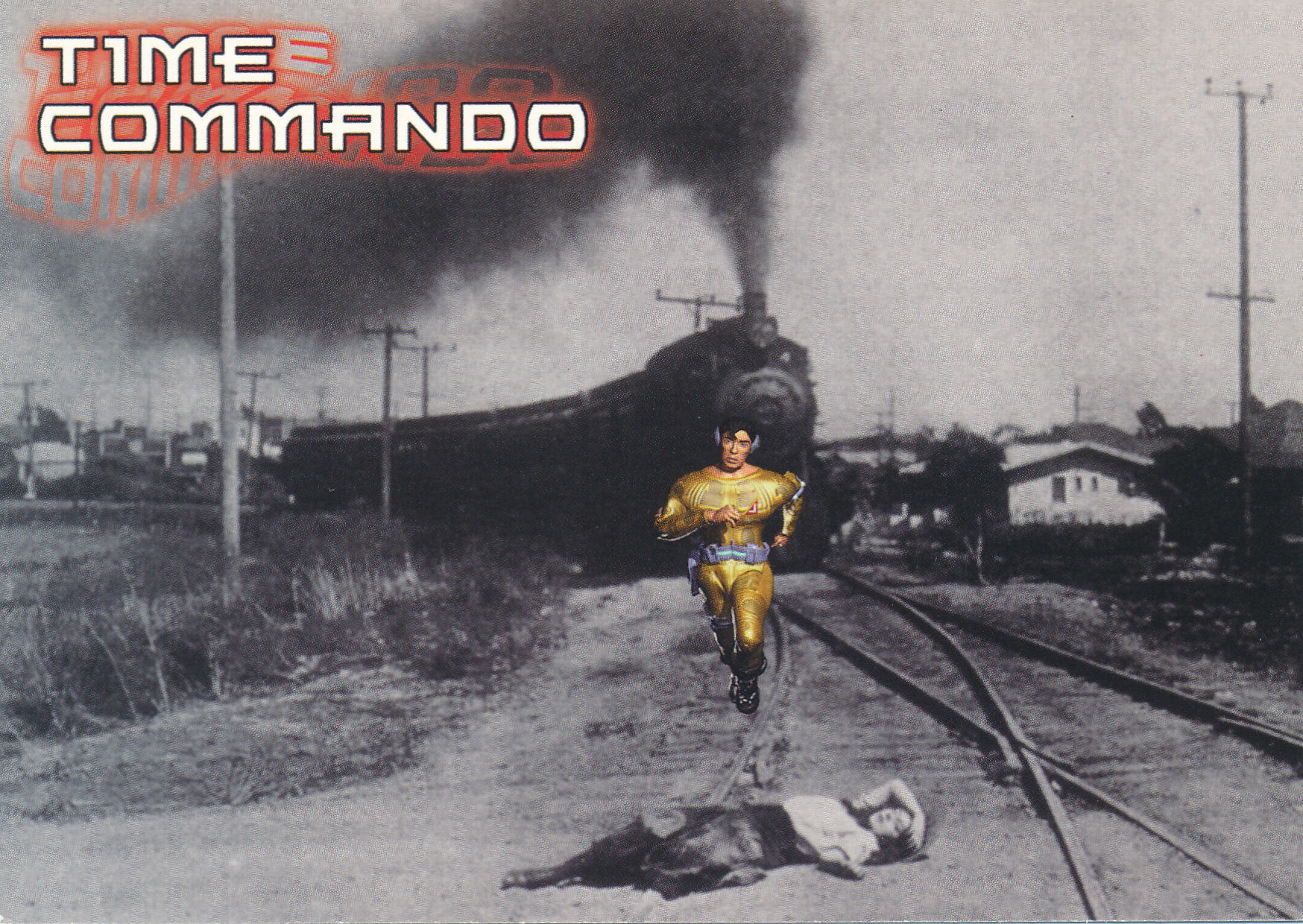 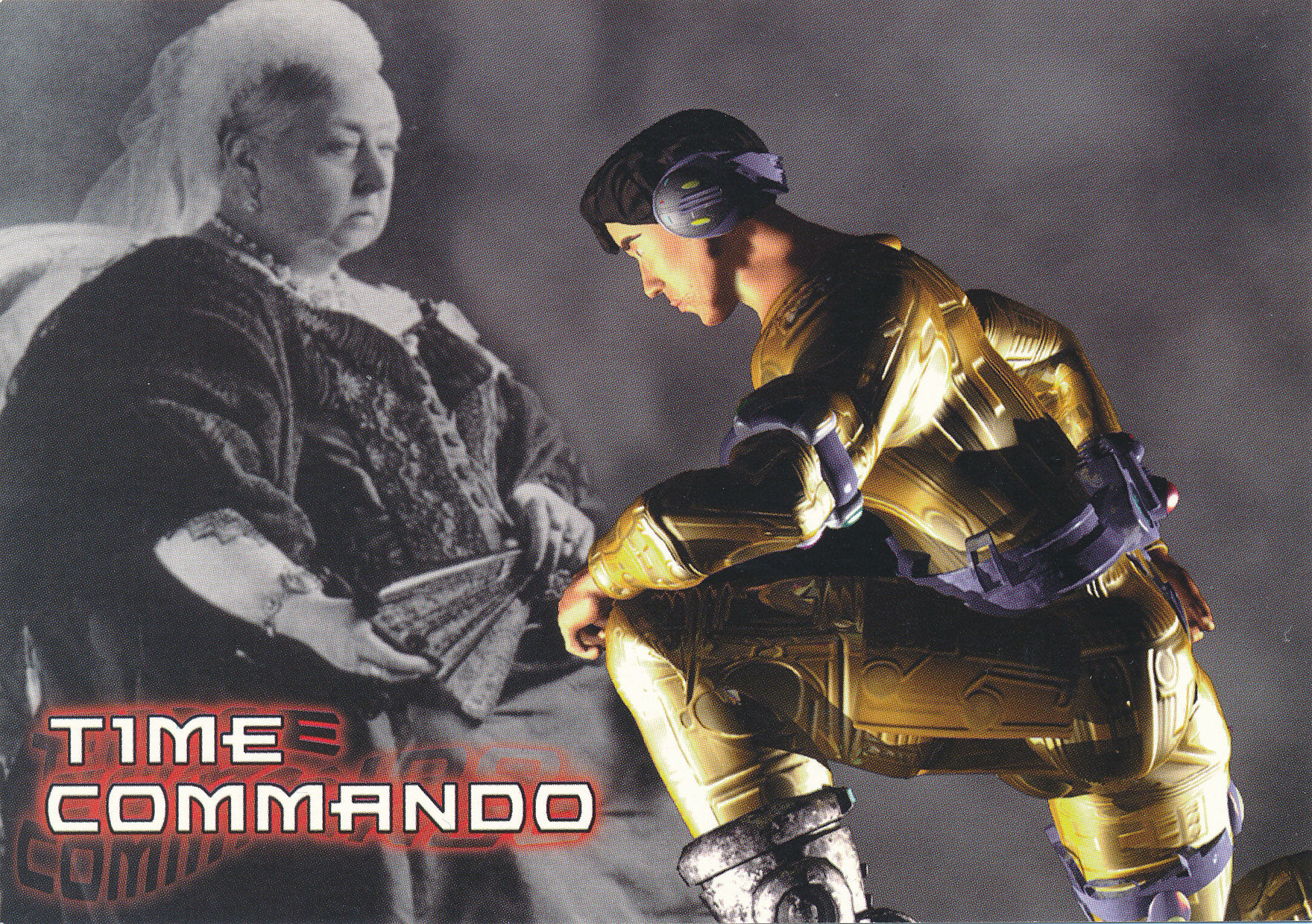 Postcard: Bowing to the Queen 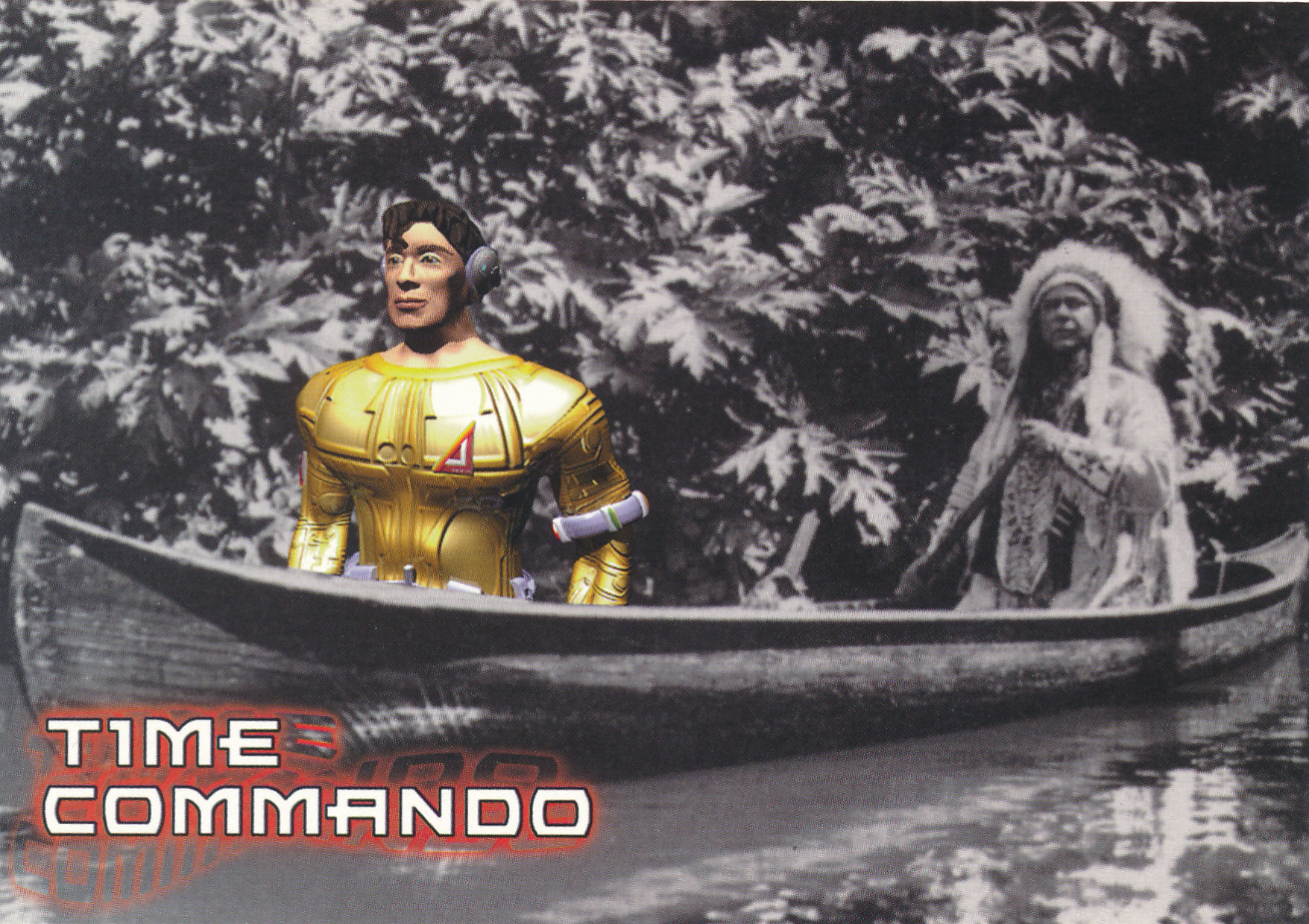 I unfortunately do not have any of the human sized cardboard cut-outs, but at least I have this small cardboard picture (with a foldable stand on the back) which would typically have been on a shelf or near the cash register in a video-game shop. 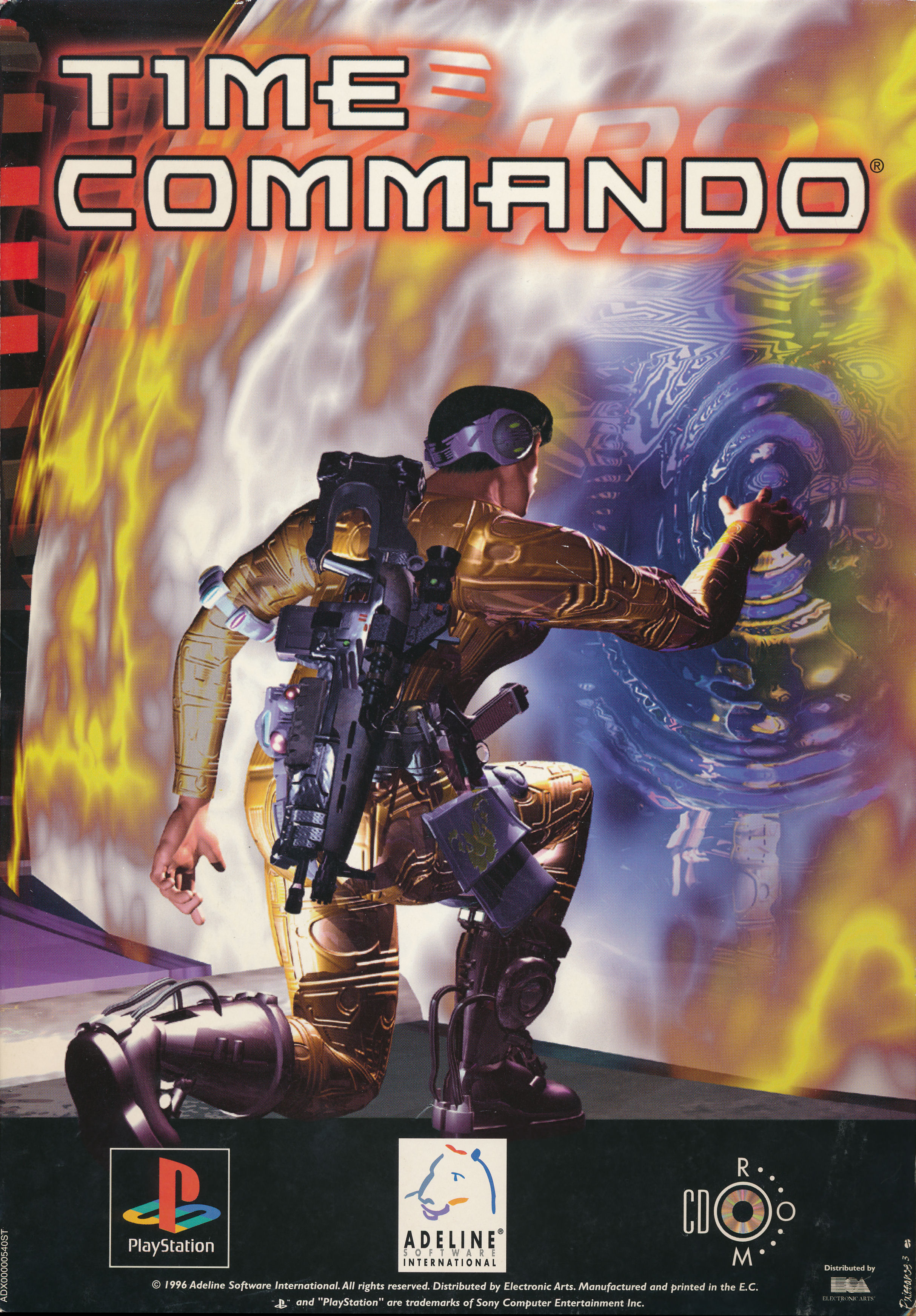 Another common way of advertising was to release demo versions of a game, such as this one available on one of the French magazines "PC Team". 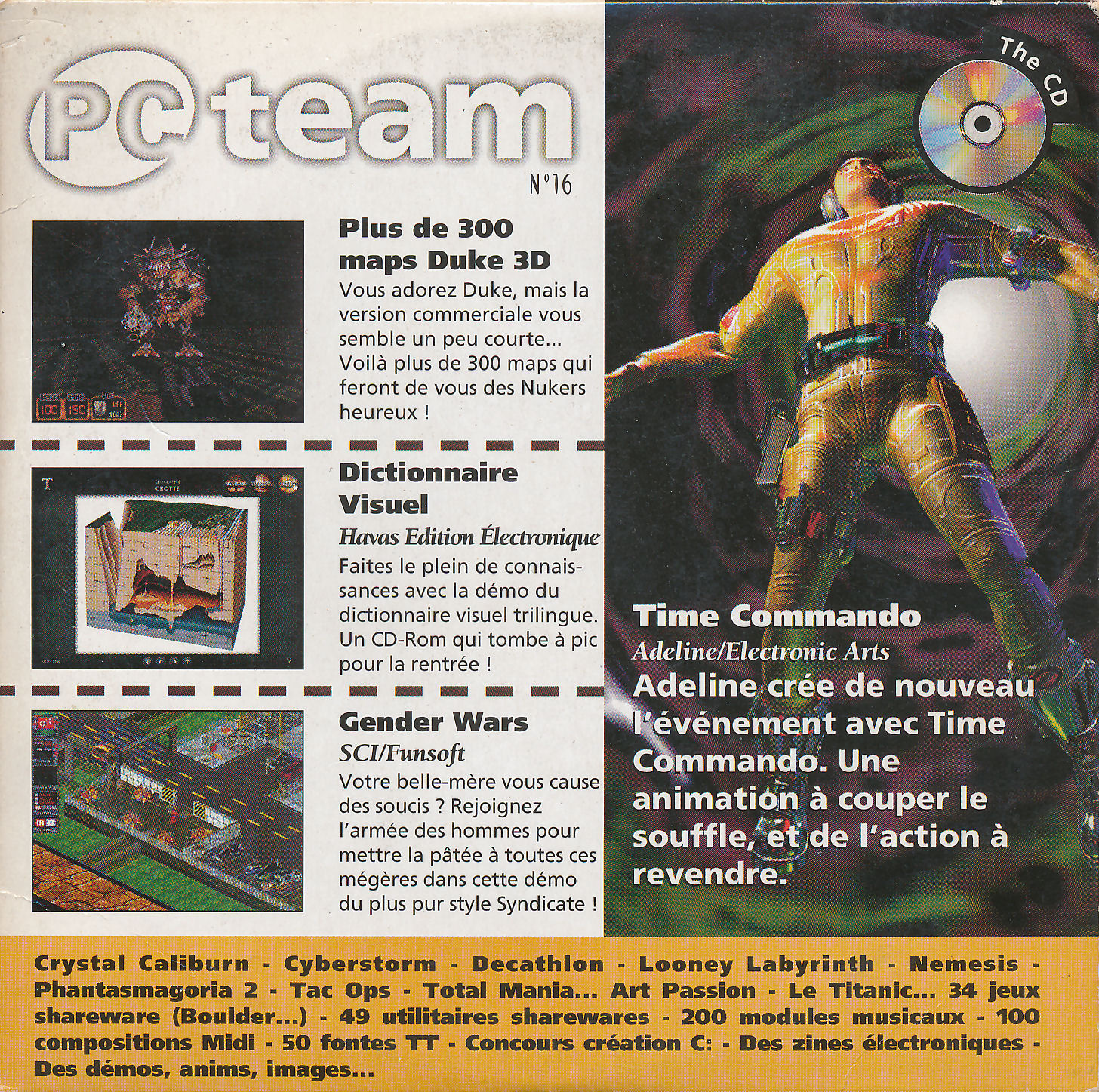 PC Team demo version
And since I'm in a good mood, I actually spent the time finding a optical drive to get the demo files out (compatible MS DOS and Windows 95)

Just for the fun, here is the content of the Read Me file:

This README file contains important information about Time Commando. It includes late breaking information, trouble shooting tactics, and recommendations on how to configure the game for best results.

Recommended (for both versions):

- Insert the Time Commando CD into the CD-ROM drive.
- Select your CD-ROM drive (within the My Computer window) and click on the Setup icon. After clicking the Setup icon, the Autoplay screen will appear.
- After the AUTOPLAY screen appears, click on Install.
- Follow on screen informations.
- After game is installed, click the Play button in the Autoplay screen to play Time Commando.

- Even though this isn't necessary in the easier modes, once you get up to the Normal mode, vary your combat tactics: use the lateral dodges [CTRL]RIGHT or [CTRL]LEFT, the protection/ parry [CTRL]DOWN and frequently change the way you strike the enemy.

- To access to the "looped demo mode", wait for the audio track's end (about 3 minutes) in the main menu or press shift+D.

- The automatic game demo may be different each time you watch it, and the last selected skill level have an influence upon it.

- If you don't have access to the SVGA High Resolution 640 x 480 mode whereas your video card can handle it, the problem might be that you don't have enough available RAM. You must have a minimum of 6 Mb of RAM available to access this mode.

- If you only got 8 Mb of RAM, you might want set your desktop in 256 colors mode and remove any background picture to save memory and increase performances.

- Depending on the performance of your CD-ROM player, it may be necessary to activate or deactivate the memory buffer for the CD-ROM. To access this setting, go into the "Configuration Panel", then select "System Properties", "Performance", "CDROM", and change "Access Optimisation for".

4. Game goal:
-------------
Your mission is to destroy the virus that has invaded the HISTORICAL TACTICAL CENTER's central computer system. The game leads you through 8 of history's grandest epochs to arrive at the 9th level where the virus is located. To do this, as you travel through time you must capture as many non-infected memory circuits (represented by blue chips) as possible. This way, you will send all the healthy memory circuits back to the main computer each time you reach the memory upload terminals.

But watch out! Time is against you, and the virus is progressively attacking the main computer's memory. When the memory is completely contaminated by the virus, the game's over. Your work will be slowed down considerably by the horde of virtual enemies deployed by the virus. You must combat and eliminate all these enemies as quickly as possible.

The following key commands are those designated by default. You can, of course, modify these commands (see corresponding menu).

UP Move forward (if an enemy is near, Stanley will jump forward slightly).
DOWN Move backward.
RIGHT Move clockwise.
LEFT Move counter-clockwise.

When you are faced with an enemy and close enough to him, his "life bar" is displayed.

CTRL + LEFT Turn left and aim
CTRL + RIGHT Turn right and aim (When an enemy can be attacked with the weapon you are using, a rifle sight will be displayed over him.)
CTRL + UP Fire / throw
CTRL + DOWN Reload (In case of danger, you can interrupt the reload phase by dodging right or left.)

[SPACE BAR]
Search / action
The space bar is the "adventure" key. It allows you to search the decor to try to find a bonus, to turn on a mechanism, to open a door, or to make Stanley take a particular action if the situation calls for it (for example, he can climb, lay down flat, ...).

1 2 3 4 5 6 Direct selection of a weapon
These key allow for direct selection of one of the weapons displayed in the six boxes on the bottom of the screen as long as the number you choose corresponds to a box containing a weapon.

W X Rotating weapon selection
These keys allow you to go from the weapon you're using (highlighted by a yellow frame) back to the one before, or on to the next one in the list. The selection frame moves directly on to the last / next weapon available. (There is no difference in the result if you choose a weapon directly by its number. Use whichever method suits you best.)

P Pause
To momentarily pause the game in progress. Music and sound effects are deactivated. To resume the game, press another key.

- PLAYER ENERGY (upper left corner)
Your energy level is shown by more or less filled "batteries" The maximum number of batteries is 4, and each time you get hit, your energy drops. When you reach 0 "battery", you're dead.

- EXTRA LIVES
The maximum number of extra lives is 3. Each time you die (meaning you have no more energy or that the virus has completely contaminated the computer's memory), you can continue to play the current game if you have an "extra life." In this case, your energy is recharged to the maximum level (but in no case will it be more than the number of batteries). During the few seconds of flashing, you will be immortal.

- ENEMY'S ENERGY (upper right corner)
Each time you are confronted by an enemy, his "life bar" will be displayed.
When it reaches 0, he's dead.

- INFECTED MEMORY INDICATOR (upper center)
During the game, the virus progressively infects the memory of the HTC computer. This bar indicates its progress. A few minutes before it is full, you'll hear a steady "beep" that grows louder.
When the memory is completely contaminated, you're dead.

- NON-INFECTED MEMORY STOCK (lower right corner)
Throughout the game, you must collect as many non-infected memory circuits as possible. These must be put in the memory upload terminals in order to stop the virus' progression.

- LIST OF AVAILABLE WEAPONS
Each level disposes of weapons from that time period. You will find them by destroying an enemy, picking them up off the ground, or searching for them in certain places. Each time, they are stockpiled in your weapon inventory boxes.
Additional information may be displayed above or below them, depending on the characteristics of each weapon. For each arm that requires ammunition, the total amount of ammunition available is displayed above it. For a weapon with a charger, small white bars indicate the weapon charger's capacity and the total quantity of ammunition available. If the charger is empty, but you still have ammunition for the weapon, you have to reload .

- WEAPON SELECTED
A yellow frame and a brighter display indicate the weapon you have in hand.

- AMMUNITION IN THE WEAPON CHARGER
If your weapon has a charger, the ammunition available in the charger is
displayed on the side of the screen.

- Healthy memory (blue chips)
Memory circuits non-infected by the virus. Pick up as many of them as possible.

- Life points (yellow cubes)
When you step on a yellow cube, you win back a little energy. But the power you gain is limited by your current number of energy stockpile batteries (1 to 4).

- Life Points (red cube)
When you step on a red cube, you gain the equivalent of one battery's worth of life points. Once again, the power gained is limited by the number of energy stockpile you have left.

- Energy stockpile battery (yellow battery)
Each battery you acquire is added to your energy stockpile capacity (points of life) until the maximum number of "batteries" (4) is reached.
Your current energy level will go back up to the maximum level each time you pick up a new battery.

- Extra life
The game is over when your energy level reaches zero, or when the virus has contaminated all of the HTC computer's memory. However, if you have an extra life, you've got another chance... You will reappear, flashing on and off, at the spot where you died. As long as the flashing continues, you are immortal.
When you use an extra life, part of the infected memory is restored and your current energy goes back up to maximum; however you lose one of your stockpile batteries (if you had more than one).

This software was tested for hardware compatibility with: