ClickSafe is dead
Sat 28th March 2009
Yesterday, an ex-colleague contacted me, he had sad news for me: 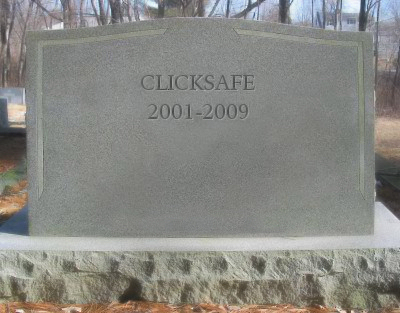 ClickSafe 2001-2009
"ClickSafe is dying, we are going to replace it by Perforce."At first I was a bit sad, but then I realised that I should not; it had lived well.

ClickSafe is a tool I made in 2001 when I was working at Eden Games with the intent to make it easy to handle large assets, in a way sufficiently easy enough that even artists would use it. (You can read more about technical details on this page)

During the three months before I left Eden (in 2005 to join Funcom), I took the time to fix some issues, update the documentation and teach another programmer how ClickSafe was working. (Unfortunately I also had to implement some last minute changes that I believe should never have been done because they were confusing at best). This means that the tool survived 4 years after I left the company; being used on Test Drive Unlimited and Alone in the Dark 5. I think it is not that bad: It means that the tool was good enough that it did not need me to be there to be usable :)

Last summer when I've been visiting my former colleagues, I was shown the latest evolution of ClickSafe. For some reason somebody decided to put a front end on it, making it look more like a Perforce or a Visual Source Safe. It also seemed to have gained weight. Definitely not the streamlined and minimalistic user interface approach I designed. I can easily understand why they wanted to ditch it.

As a side note, I will take the opportunity for complaining again about Microsoft.

Even if Eden had wanted to keep ClickSafe, it should have been changed because somebody at Microsoft decided that Windows Vista would not implement one of the shell extension features, IColumnProvider. Instead people should use the new property system. Seriously, what are they thinking. You don't remove SOME of the interfaces of an API. Either you say "shell extension are dead", or you keep supporting them. I've no problem with having a new and better API to use for doing something, but having to implement one feature differently on Vista and XP because sudendly the feature disappeared is just painful (because of course the property system is not available on XP).

Personally, I'm not quite sure that using Perforce for assets is going to be any better than the current solution, they will most probably have to redo a lot of user interface before the users feel at ease using it.

Now I have one big question, are they still using the Builder ?