Power Brexit
Sun 6th January 2019
Binatone Data RecorderChanging a UK plugOpening the casingRemoving the old cordFinishing touches
A few months ago, when I started collecting Oric software, I realized that my old tape deck was starting to be very tired and unreliable. Then I spotted an auction for a "Binatone Data Recorder", which apparently had been recently serviced with new belts and power cable.

The form factor also seemed ideal to fit on my desk without taking too much room... the only problem was that it had one of the annoying UK plugs that require an adapter to fit in EU mains.

Time to fix that.

While writting this article, I actually found a bunch of ads for this particular model, and funilly enough, the first one I found had both an Oric Atmos and a Binatone on the same page :) 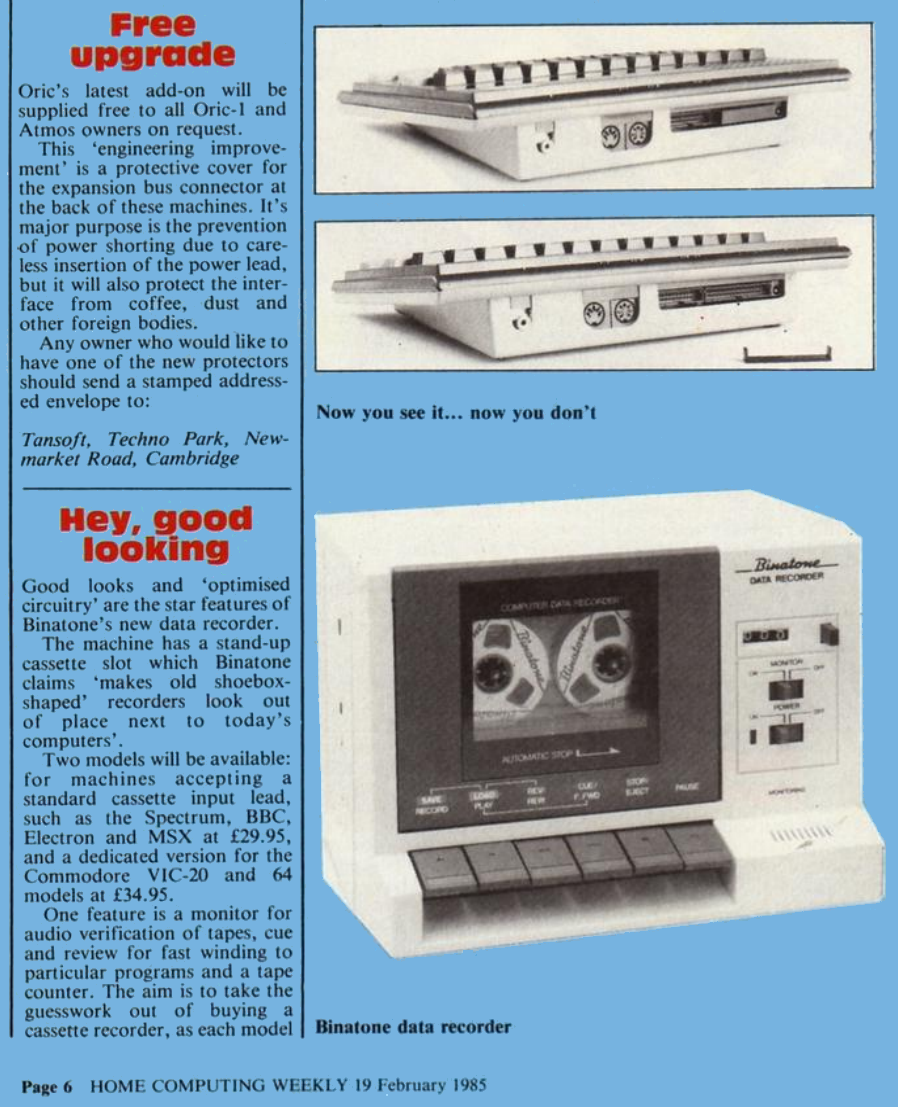 Binatone Data Recorder
The cool thing about this device is that it has a built-in "monitor" mode that allows you to enable or disable the internal speaker independently of the fact you have connected the output jack or not.

Thanks to this handy feature, you can check the sound while loading, which on machines as temperamental as the Oric is very welcome.

The vertical format is also quite nice, taking a lot less room on the desk.

On the left side you get the usual three connectors (input, output, and remote), as well as a volume control and a "phase selector"1.

I did try a few games, some did load perfectly ("Manic Miner", "Defence Force", "Mr Wimpy", ...) and some other I could not load without errors, so maybe I should investigate a device Mr Baz told me about2.

Here is what the device actually looks like, with the original UK plug and the EU converter. 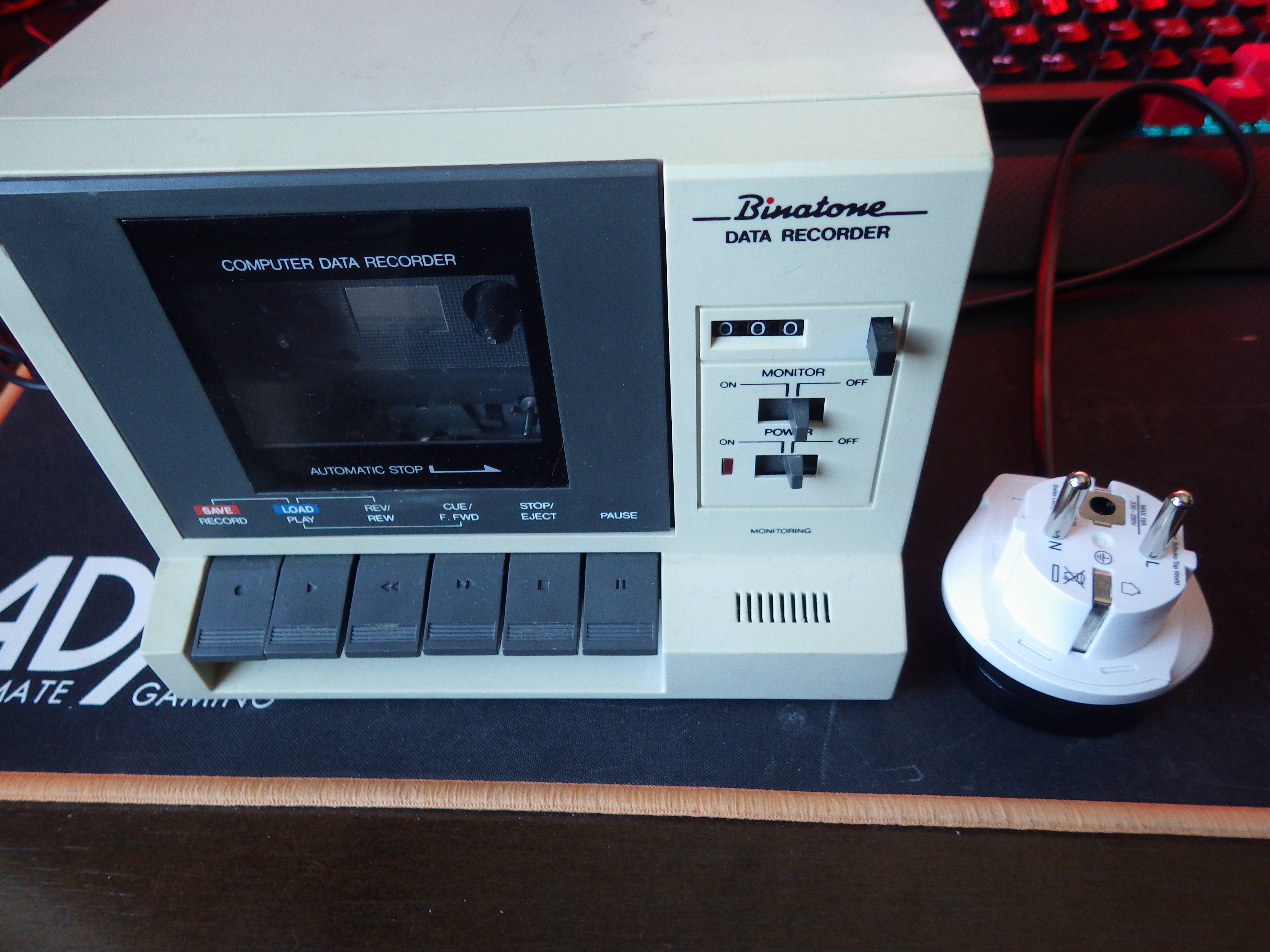 Data Recorder with UK plug and EU converter
As you can see, the plug is very large and bulky, which causes problems when you need to connect other peripherals on the same power strip.

The first thing to check is obviously to see if needs a two poles or three poles (grounded) connector. 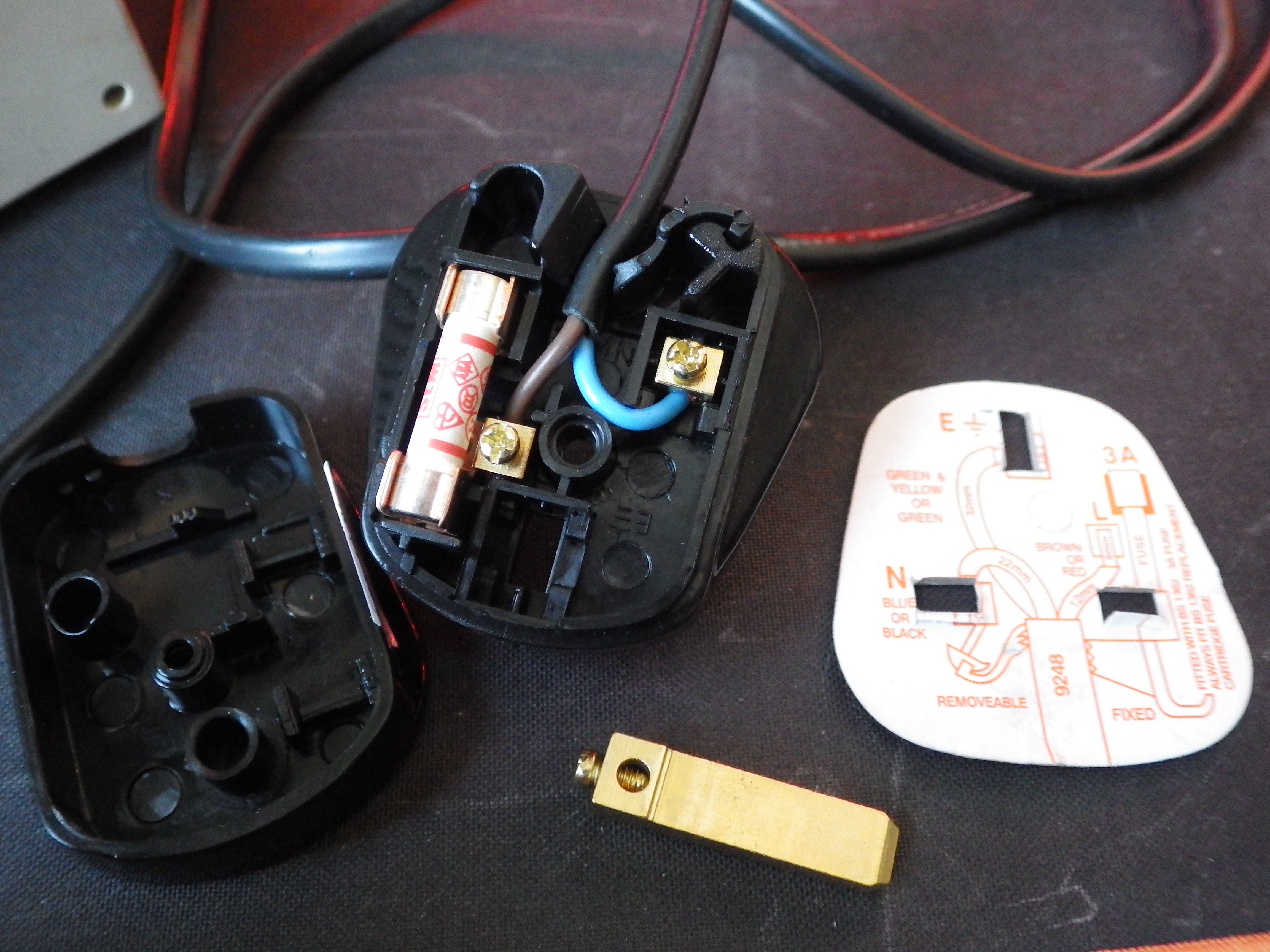 Inside the plug
There you go, one screw to remove, and we can see that basically the ground pin is not used, and since modern places all have differential fuse systems, the fuse in the plug itself is not really necessary here, I can safely replace the plug by a standard 2 pole ones.

That being said, the device is cream white, so a long black cable is not super esthetical, maybe we can do better by replacing the entire cord instead of just the plug.

At the bottom of the device are two small screws which can easily be removed with a standard screwdriver, the only thing being that one of them is covered by a "warranty void" sticker. 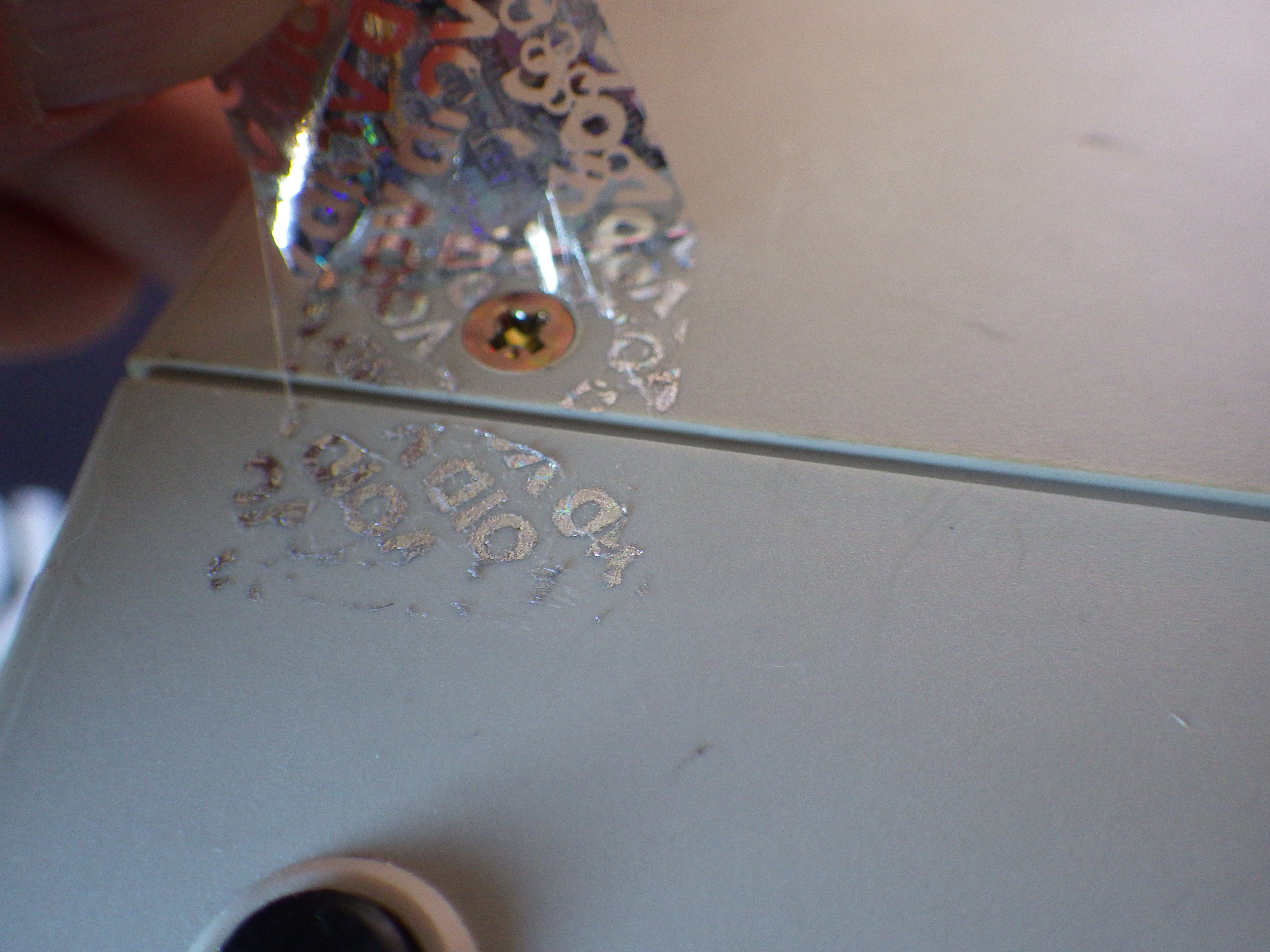 Warranty's void
With these two screws removed, all you need to do is to open the trap door (using the STOP/EJECT push button) and then slide out the front part of the casing to disengage the two small plastic notches on the top, which gives you access to the innards. 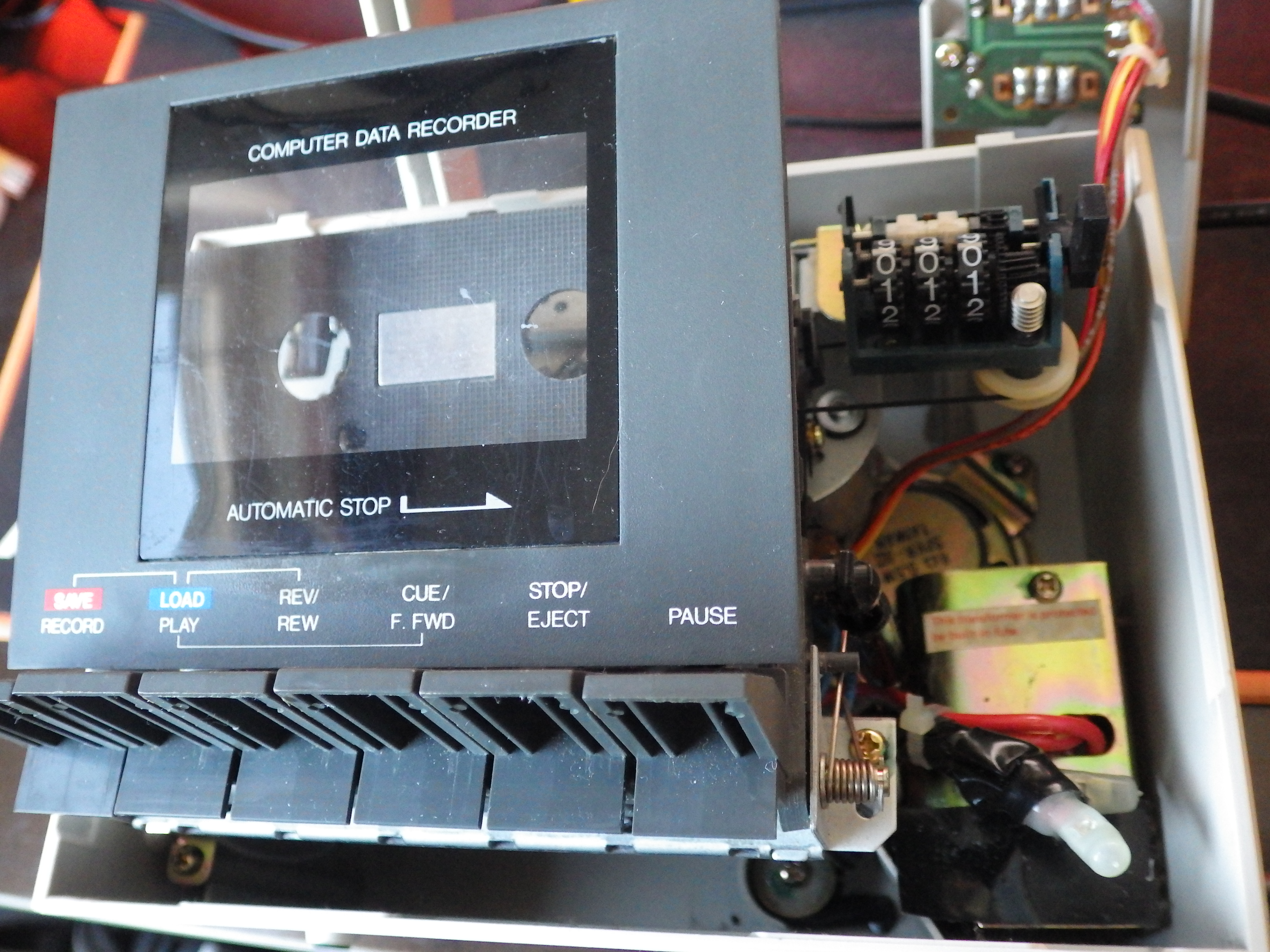 Look ma, I'm naked!
From there was can easily see the black cord coming through a hole on the back, attached to the case thanks to a bent in the cable secured with a single screw and washer, then the two wires are just connected to two other wires coming from the transformer, using some crimped on connector and some sticky tape.

Should not be too difficult to replace.

You could of course removing the entire body of the device to access easily the parts we want to change, but if you don't have crossed eyes and shaky hands, all you need is a long screwdriver to access the screw, and some pliers to help put it back on place later.

I should probably have written that earlier, but you are not supposed to do that with the plug still in the mains, just saying.

Also make sure the capacitors are emptied, if you see the power led still bright when it's ON, just wait. 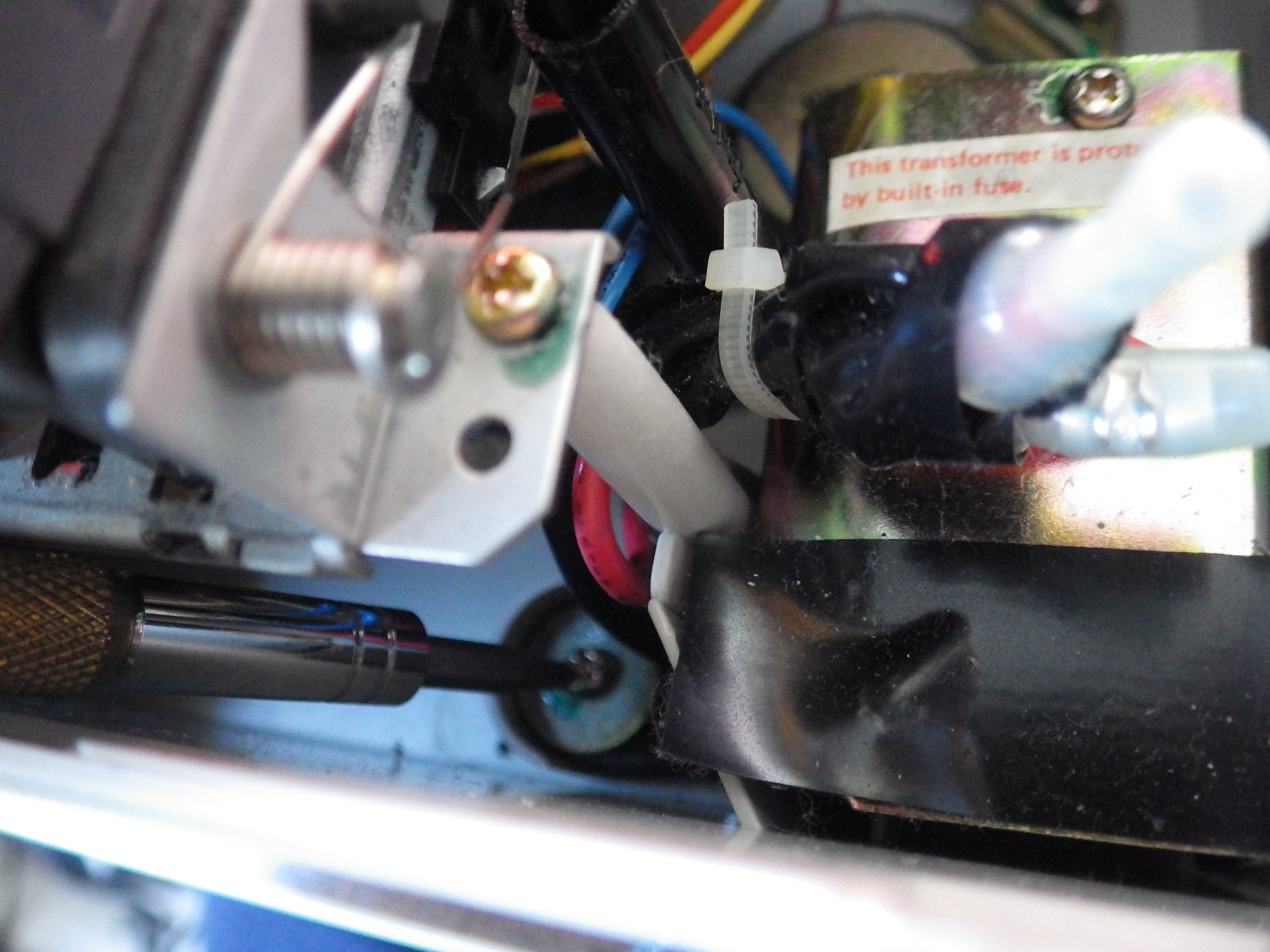 Removal of the locking washer
Make sure the washer and screw don't fall in the case, you need to put them back later, they are the things that guarantee that the cable will stay securrely attached to the device.

When the operation is done you should see something like that: 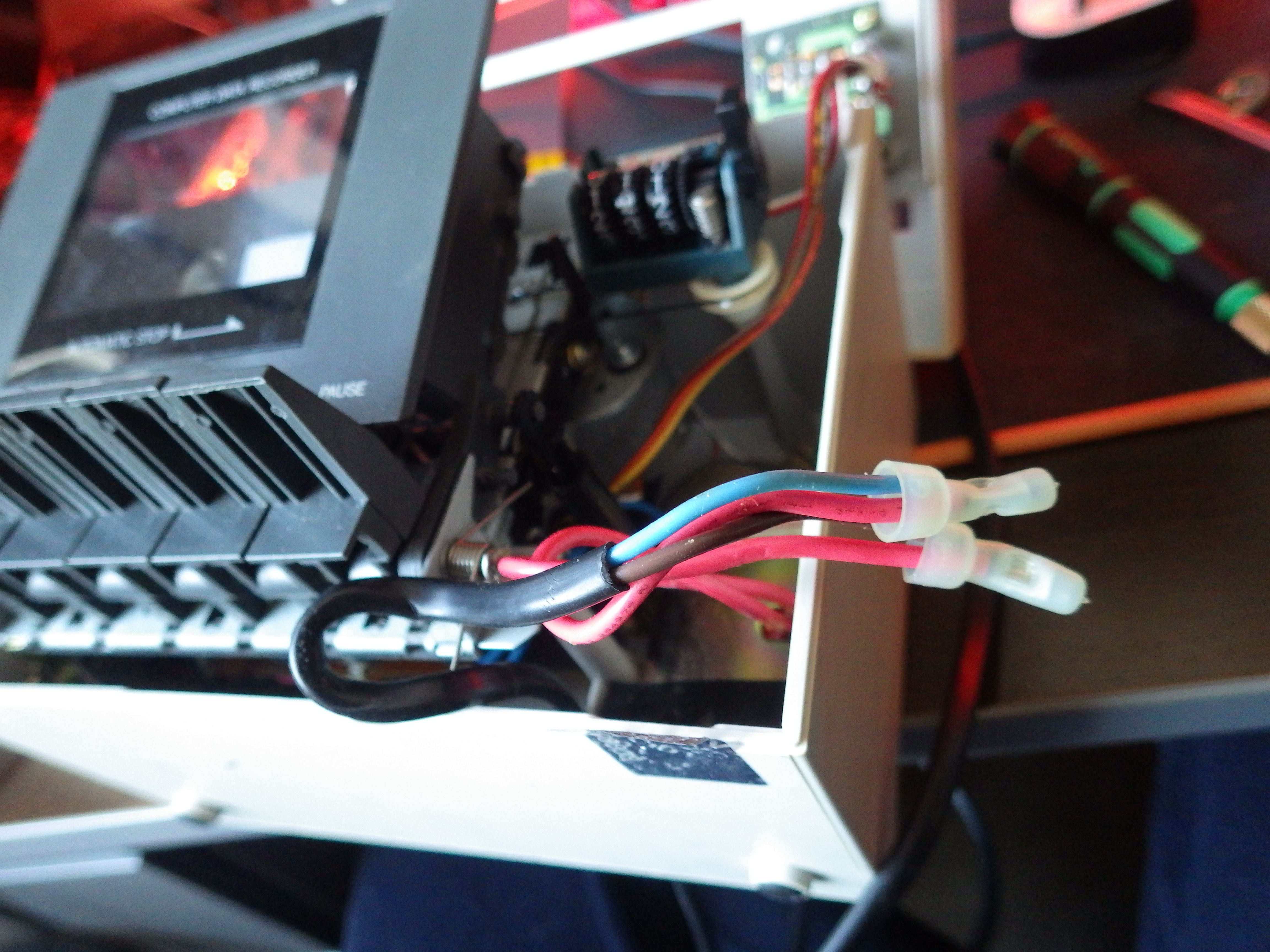 Cable connection
At this point I don't have any other photo, but it's basically very simple:

When I write "adequate", it's because not every country has the same available type of locking system in the shops.

Remember we are using 220 volt AC power, we are not playing with AA batteries.
Here is what I used in my situation: 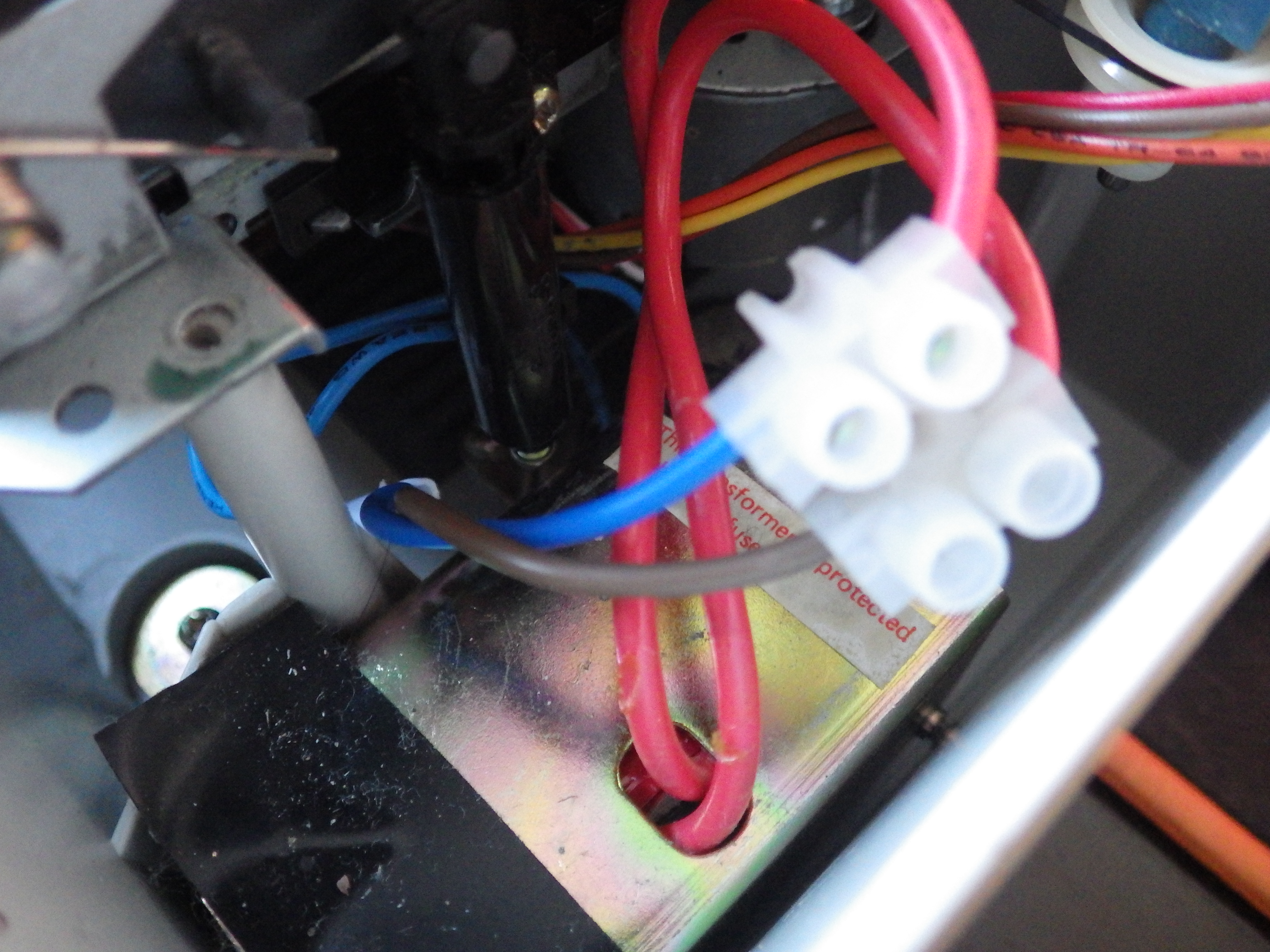 Replaced cable
It's a simple "domino" connector, just make sure that no part of the wire is visible or can be touched, and that the two wires are correctly overlapping inside the locking system and correctly touch both screws:

You don't want these things to come loose and start wiggling inside the case (which fortunately is in plastic).

Before putting back the front cover, you want to check that it all actually works, so take a last look to make sure it's safe, and plug the device, then switch it on.

If you get the red light on, and you are still alive3, you should be good to go. 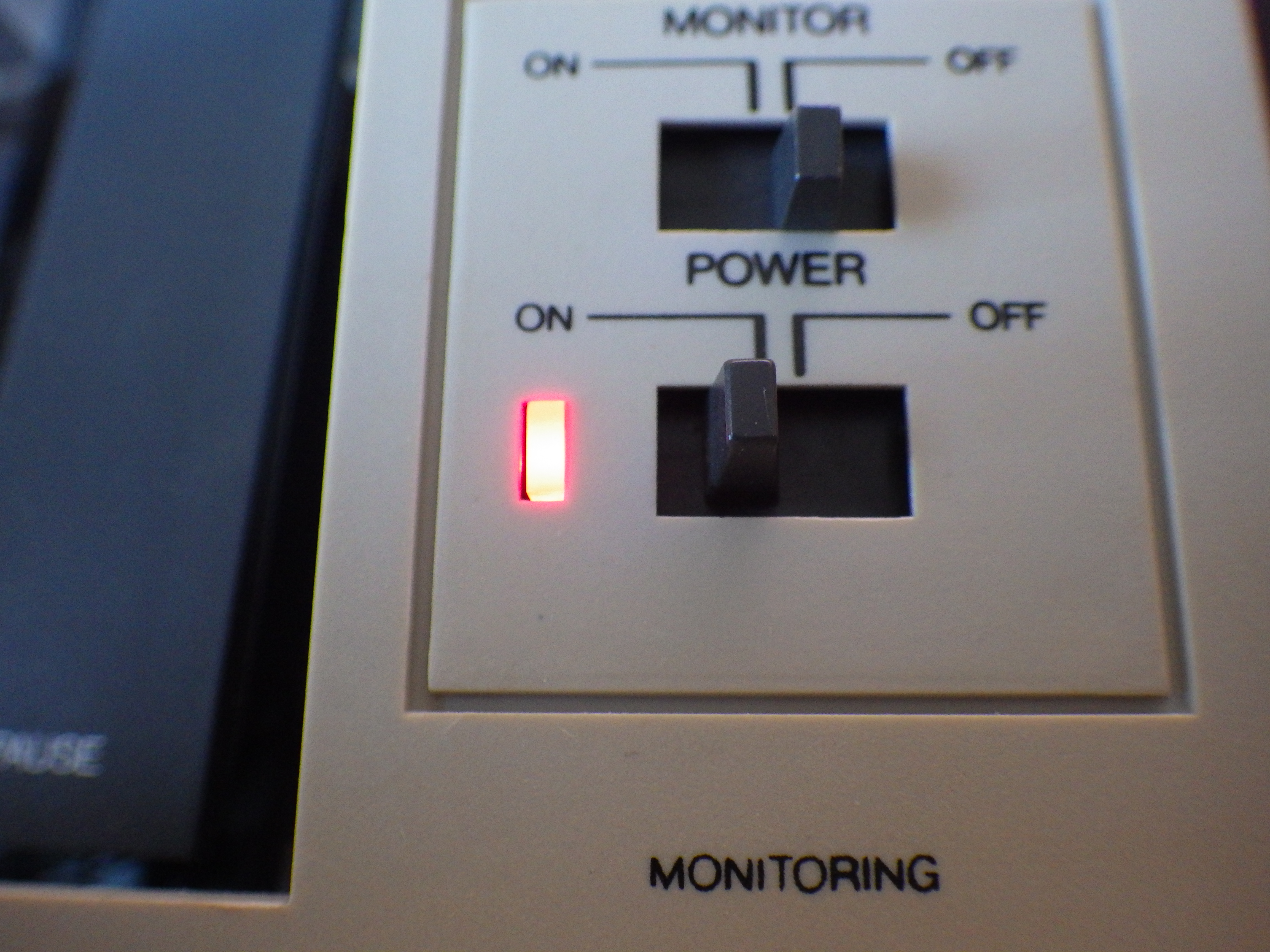 It's alive!
Now that it's all working, you can just put back the cover, first sliding-in the plastic notches, then close the bottom, then secure with the screws. 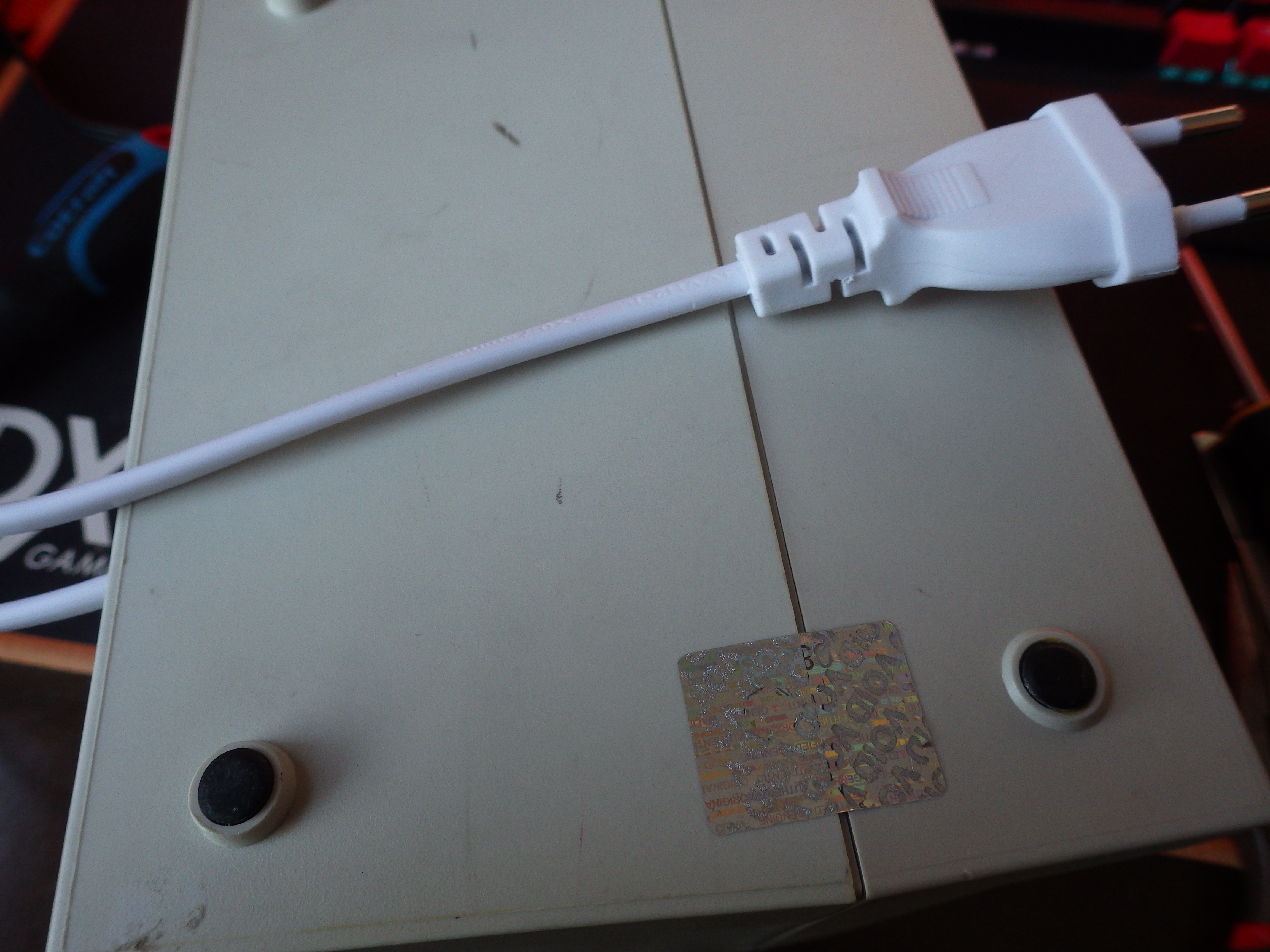 Case closed
Of course, you now need to test that the device still actually work. 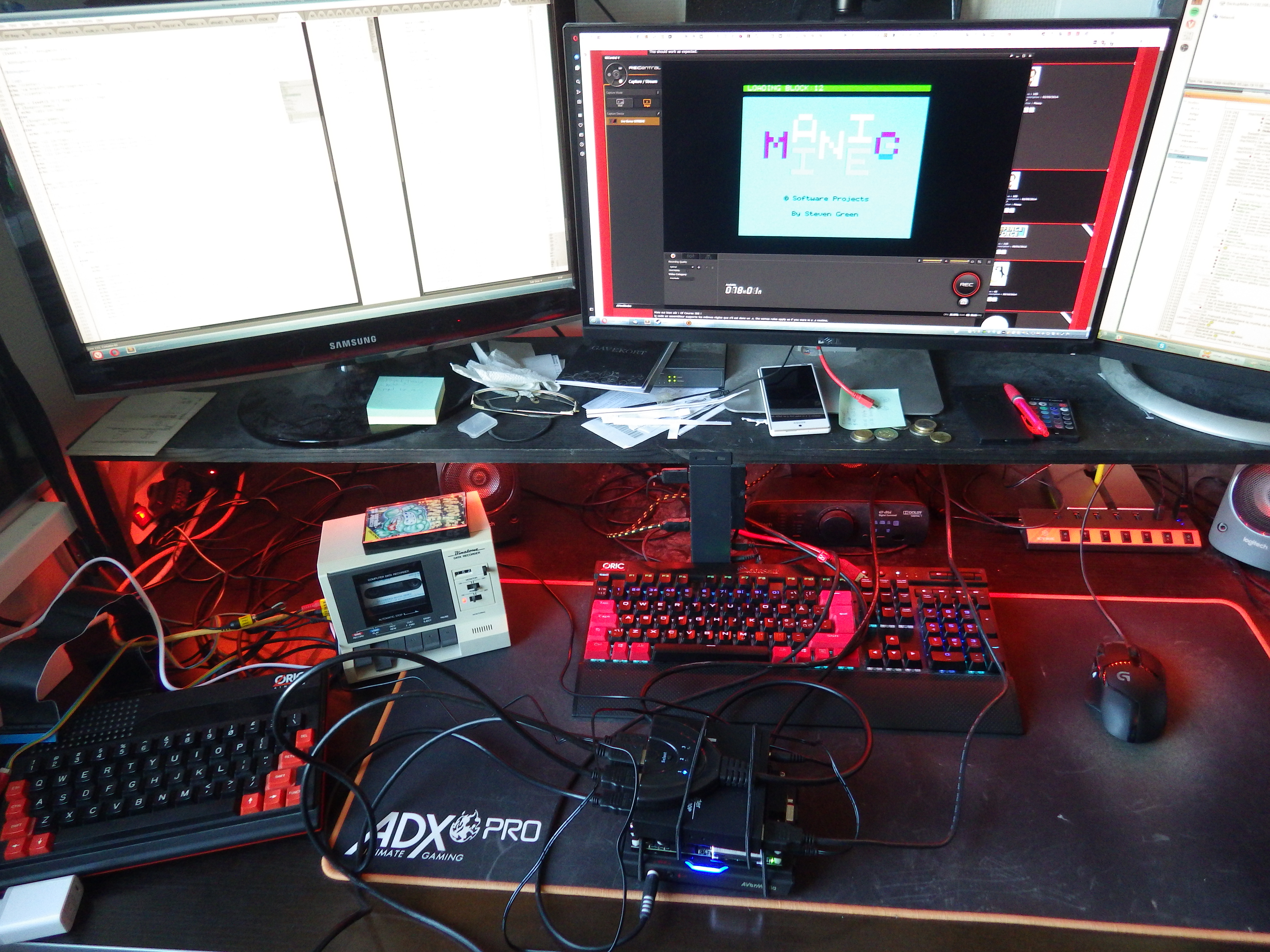 A little game of Manic Miner
Looks like everything is fine, I had no problem loading Manic Miner4...
...I will blame the fact I did not pass the first level to loading problems, must be a bug!

1. Not quite sure what the usage is, the choice is between "NOR" and "REV", maybe it reverses the signal direction?↩
2. Klydes Oric Signal Conditioner designed to filter the audio signal and make it nice and square↩
3. If your building suddenly get engulfed in flames, it's probably not related to anything you just did, I will just assume you did not do that with flammable explosive around you :p↩
4. Yes, that's the game that was on the poster in Stehan's room in Bandersnatch↩