Upgradable hardware
Sat 12th August 2017
Your Grandmother's washing machineCapitalism suckMobile devicesNokia 700Samsung Series 7 ChronosStep by Step
These days it looks like more and more people think that maybe we should be a bit more conscious regarding how we treat our environment.

Unfortunately, there are still people buying things that cannot be repaired or upgraded.

This is not good.

When I was a teenager, my mother was buying pants that were longer than what was necessary, and she would just tuck away the length inside the pants, using some kind of soft-steamed adhesive to make it stick.

Then a few months later after I've grown up a bit, she would just steam it away, let some lose, and then stick it again. 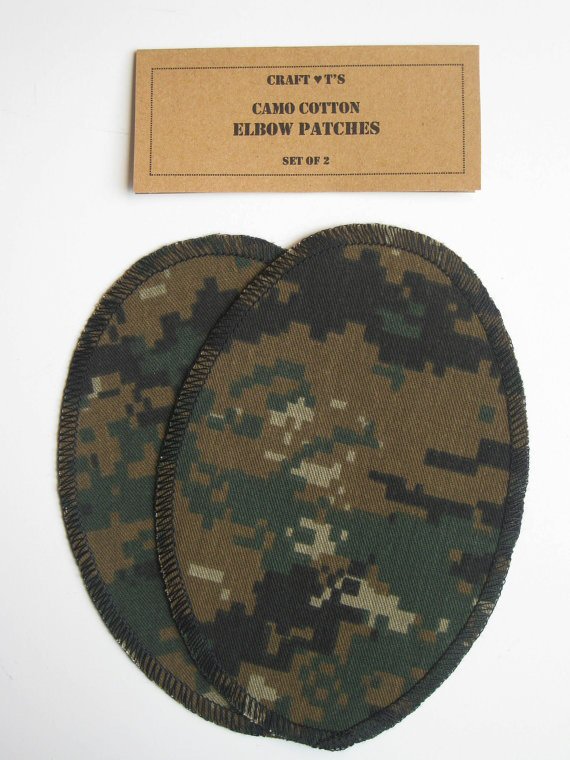 Elbow Patches for Hipsters soldiers
Similarly, when the fabric around the elbows on my long sleeve sweaters started to get thin, she would sew patches around them.

I'll be the first to admit that it did not look very sexy, but back in the days we were not continuously showered with messages about how it was important to look good.

What matters is the end result: Instead of spending our time throwing away things we would just fix them, and when they got too small they would be worn by the younger brother or sister. 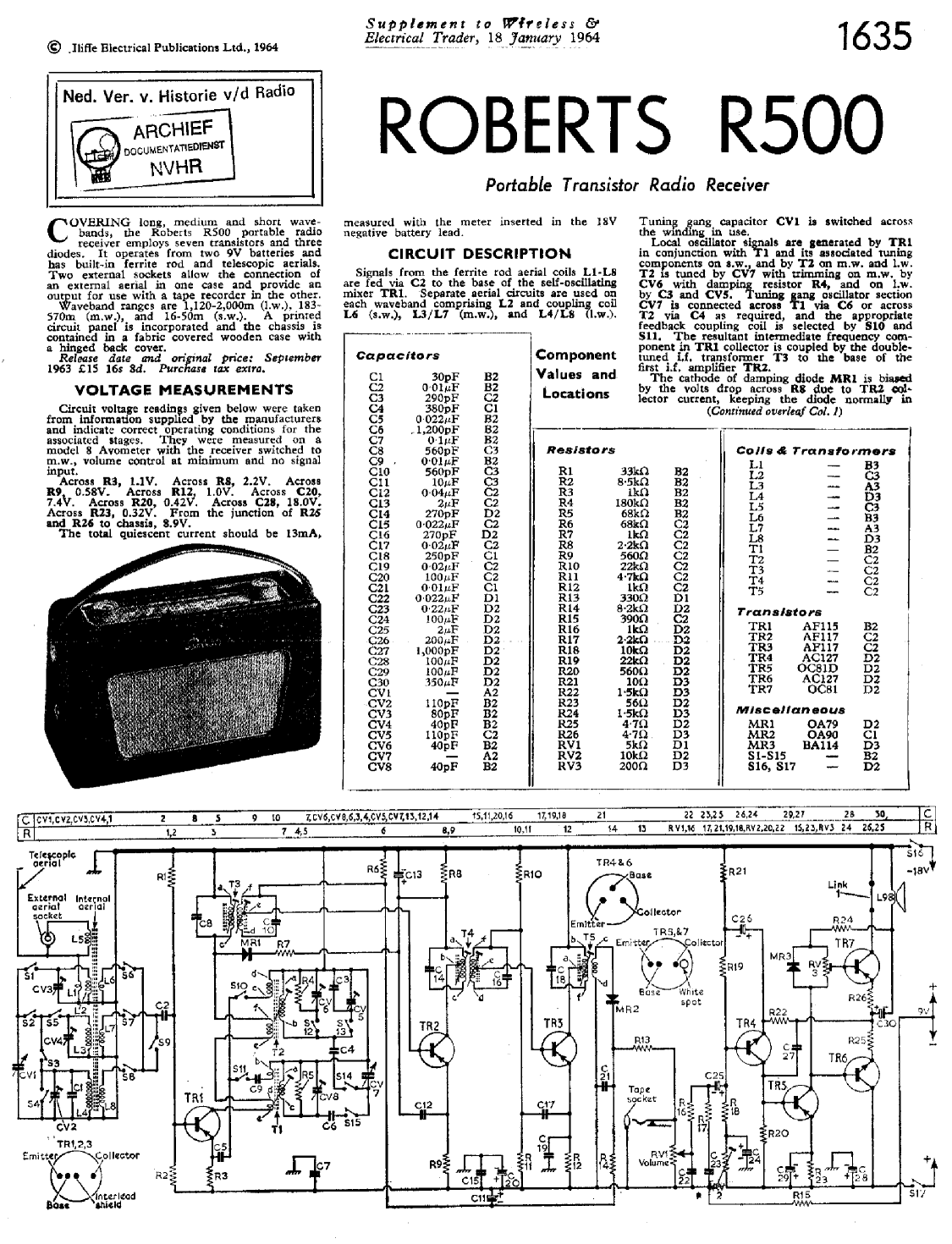 Roberts 500 Portable Radio
The same thing was true for hardware: Every single radio or television set you bought came with the complete schematics diagrams so they could be repaired.

And obviously the washing machine was a great example of hardware designed to last: It was not uncommon to have them go through at least one or two generations before finally dying.

Obviously the situation today has changed, and unfortunately not for the best.

Because of the worshiping of the God of Eternal Growth ("You shall increase you GDP1 year after year") some things have become ineluctable.

Consume
There are been some discussion about the universal revenue in recent years.

I do not have enough knowledge to see all the possible consequences of what that would bring, but at a glance what I would imagine is that:

Basically I believe that would be a first step in unknitting a lot of very negative things that we have to deal with in our lives.

But yeah, that's not going to happen, just let me dream a bit :)

If you take any Laptop or Mobile phone made before 2010, you'll realize they pretty much all have user replaceable parts.

Many of them even have body parts that can be swapped out, so you can fix them when they break, or mix and match colors to make them look different.

Most of them are also built with modular parts that can easily be replaced in case of problems.

On the other hand, if you look at any recent Apple device, you'll find out you better decide at buying time which amount of memory of storage you want to have, because it's all soldered on the mother board and is impossible to replace3.

And even if it was not, you could not replace it anyway because it's all glued together, including the battery, so when that one dies all you can do is to throw it away in the recycle bin and buy a new one.

And by the way, recycling a laptop where all the parts are glued together is totally not trivial, just saying. 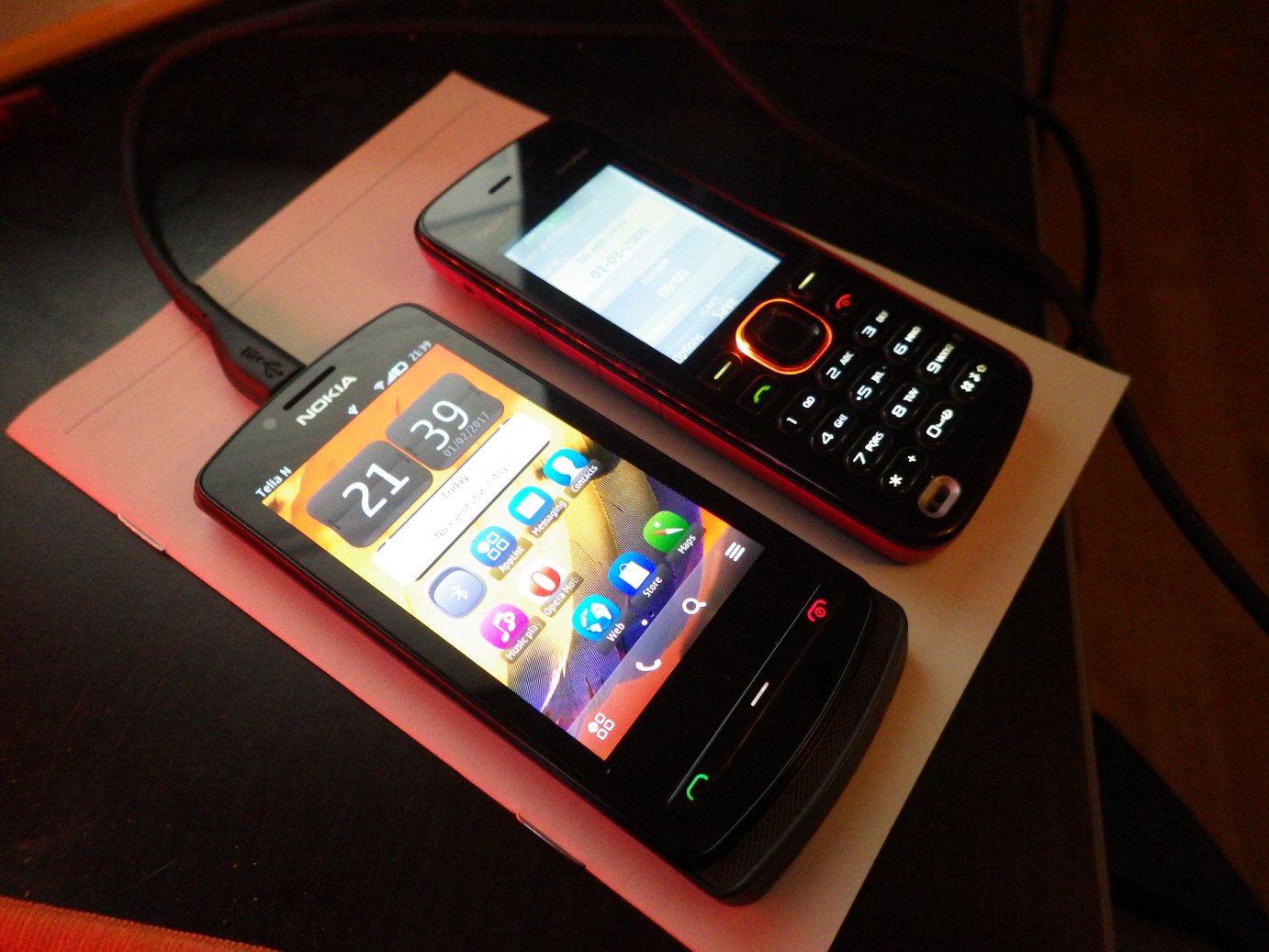 Nokia 700 and Xpress Music 5220
A few months ago I replaced my Nokia Xpress music 5220 by a more recent mobile.

The old one is still working fine, it's in my drawer with the battery removed. I'm pretty sure it would work just fine if I need an emergency mobile.

The reason I had to change is mostly that not having internet and gps on it was kind of a handicap: If you have to meet somebody, go to some event, etc... not being able to check emails, facebook, google maps, etc... makes it harder.

I could have bought a new mobile, instead I bought a second hand Nokia 700 from 2012.

My rationale is that by using a second hand mobile, I help limit the creation of new mobiles: If people stop buying new ones when they can use old ones, that's less stuff to build in China and then ship over the world on polluting container ships4.

When my girlfriend's daughter laughed at my mobile saying her iPhone had more storage than mine (it came with a 2 GB sdcard), I just took out a 128 GB card I had in my drawer, copied the 2 GB one content on it, and voila!

Now I have twice as much storage, and she can't do anything about that because it's an iPhone. 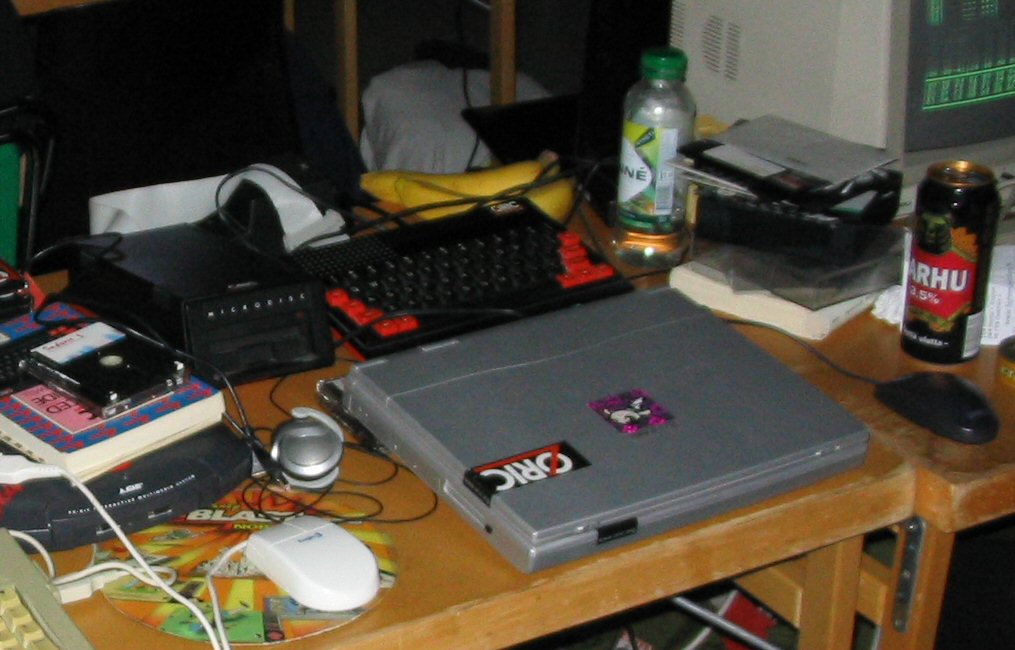 Gericom Webgine Advance Laptop
I bought my first laptop in 2002, it was cheap, and it was crap5, but it worked well enough that I could travel around Europe to attend some demo parties in Germany, Finland, Hungary, Sweden and Norway.

I still had it 9 years later.

Kind of falling appart, required a cooling plate under so it stopped crash with overheating, but all in all I had been able to upgrade the batteries, memory and hard drive to keep it usable over time.

In 2012 I decided to get a new machine and managed to find a very competitively priced one: Windows 8 had just been released, so the market was flooded with touched enabled glossy screen machines. I was lucky enough to find one of these 14" Samsung Series 7 Chronos machines with Windows 7 installed.

I immediately ordered upgrade parts, and a few weeks later I had the memory bumped to 12 gigabytes, the 1 terabyte hdd had migrated into an external USB enclosure to be replaced by a 256 gigs Samsung 840 SSD.

This machine has been working flawlessly6 since then, but unfortunately the battery life has reached the point where I can just barely watch an entire movie on one charge before the machine shuts down.

I did a quick check online to see what I could get for the price I paid for this machine (1000 euros including the upgrades), the performance improvement over the Samsung is simply not worth it, so instead I decided to change the battery7. 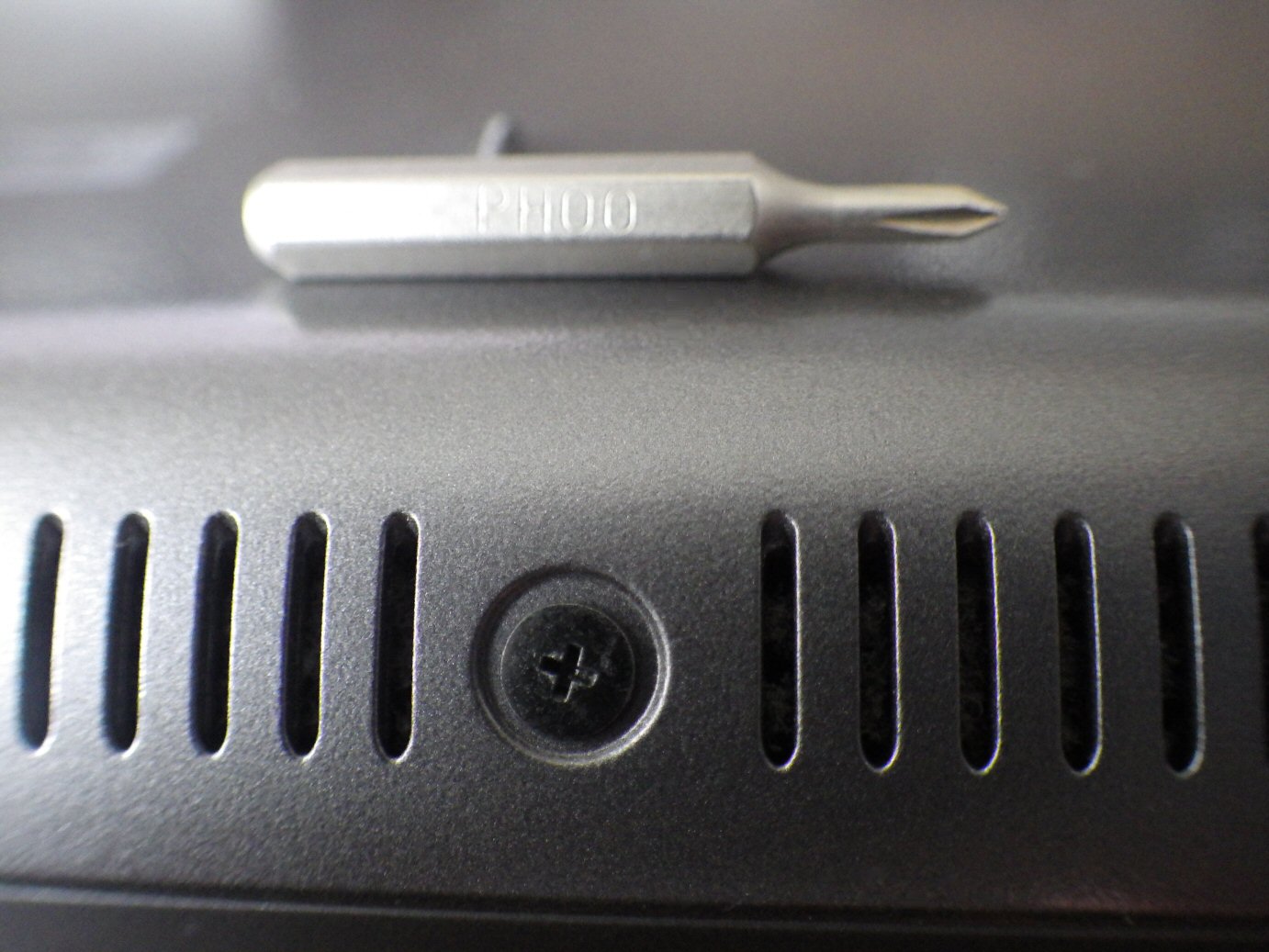 Philips PH00 screws
Since apparently some people think it requires an expert knowledge in mechanical engineering to perform such an operation, I've taken photos.

You need two tools for this to happen:

If you use any random screwdriver, there's a pretty much certain probability that you will rip out the head of the screws. They are that small and fragile.

The first step is to remove all the small screws at the bottom.

On the 14" model, along the outer rim you'll find one on each corner, one additional set on each side, two on the front and two on the back.

The one securing the access door to the removable memory sticks does not need to be removed.

When all the screws are gone, all you need to do is to slide the thin tool or blade along the edge between the plastic and metal parts and carefully pop out the small plastic grips.

When you are done, you should see something similar to this: 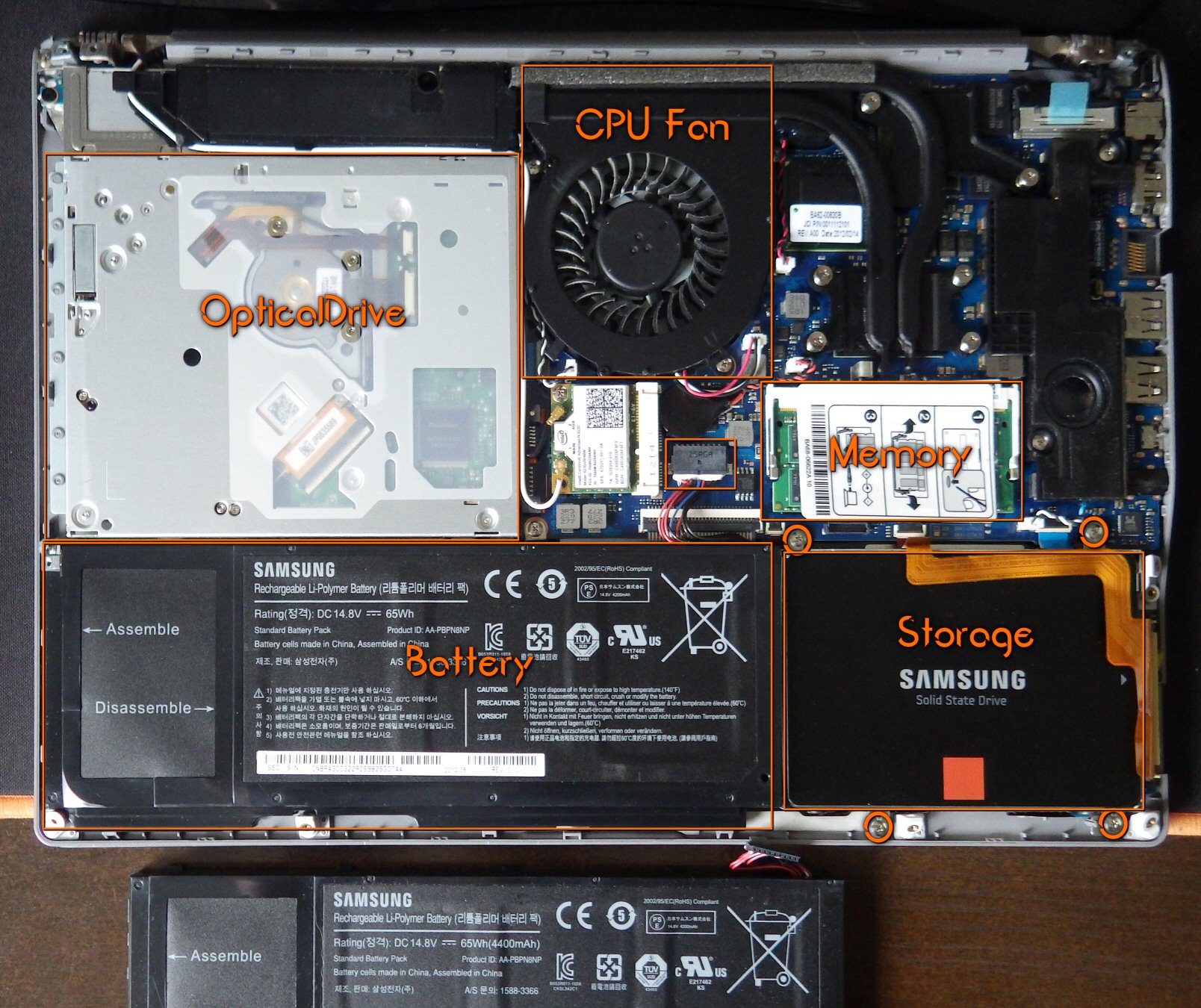 Bottom panel removed (Click to zoom)
This, by the way, is the perfect time to get the dust out of the fan, upgrade the memory, or replace the hard drive.

Replacing the battery is quite easy:

You just need to remove the four screws that secure the hard drive (or ssd). 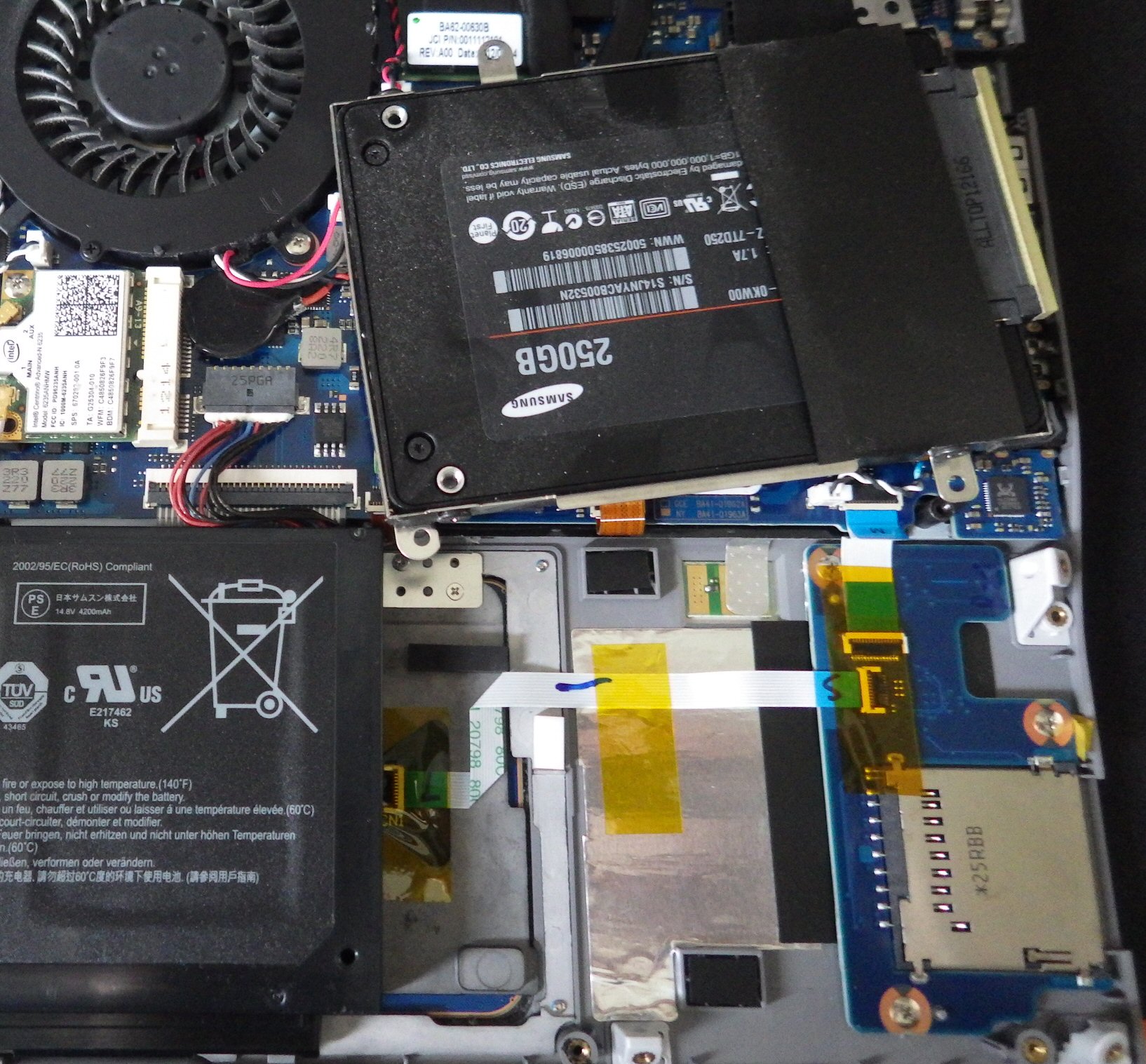 SSD drive removed
Then disconnect the battery (small orange rectangle on the center of the picture) by sliding it out of the plastic connector.

And finally just follow the instructions written on the battery itself, slide out the old one to the right, slide in the new one.

Reconnect the battery, put back the hard drive or ssd with the four screws, clip back and screw the case.

One last thing you may need to do is to run the Smart Battery Calibration: Make sure the laptop is not connected to the main power, switch it on and quickly press the F2 key to enter the bios. 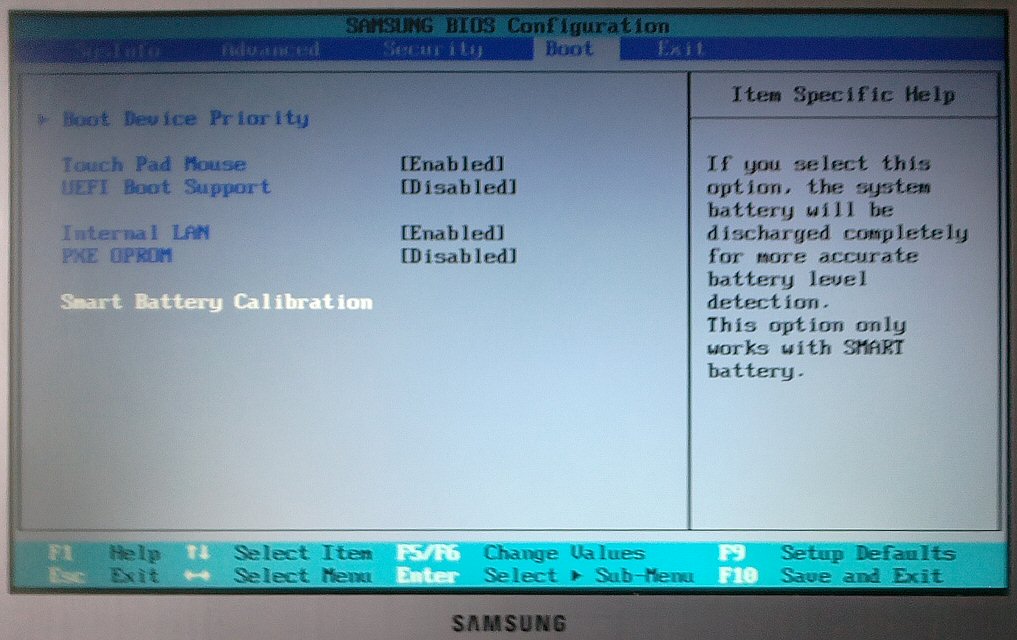 Smart Battery Calibration
Basically what this does is recalibrate the sensors used by the computer to know the state of the battery: It will empty the battery completely while taking accurate measurement, which later will be used by the operating system to tell you how much juice remain.

There you go, hope this helped.

1. Gross Domestic Product↩
2. The problem for many indy developers is that they can barely make enough money to pay their rent and food↩
3. And they still call this shit "pro" models↩
4. https://www.quora.com/Is-it-true-that-the-15-biggest-ships-in-the-world-produce-more-pollution-than-all-the-cars↩
5. Gericom, Atlon 1.4GHZ, 128 megs of ram, 20 gigs of slow HDD↩
6. Except Windows 10 upgrade which miserably wreaked the install↩
7. 32 euros, port included↩