We did not have internet at the university so it was with great interest I started poking at the Windows 3.1 machine running NCSA Mozaic in the company meeting room.

We only had one email address for the entire company, one of these long numerical ones@compuserve.com.

On this single shared machine I visited a virtual reality recreation of some museums, got access to some programming pages I did not even know existed, and ultimately discovered there was some Oric emulators and even some cross compilers and assemblers to make software for this machine!

I continued using the work machine for about two years, and then when I was able to afford it I got my own 56k modem Internet access at home.

The first few months I only did some IRC chat, browsed the web, learnt how all that worked, and then I decided to have my own web page.

This should have been easy, but unfortunately in 1997 the ISP were either incompetents, expensive, did not provide web hosting, or simply would run out of business after a few months.

After a few ISP changes I ended up with a decent offer from HOL (Havas OnLine), where I was finally able to show the world my first beautifully handcrafted homepage: 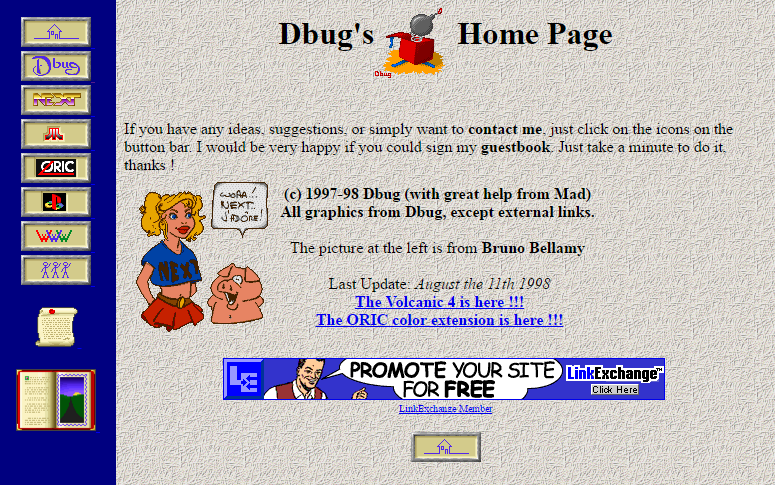 http://wwwperso.hol.fr/~mpointie (1998)
Note that this is a screenshot of the actual unmodified html code with frames and gifs, everything is still working just fine and looks the same as it did 20 years ago.

I guess that's a testament of the solidity of the HTML format.

All these small buttons were drawn pixel by pixel in Deluxe Paint, I'm not sure I would have the patience these days, but by then the standard resolution was about 640x480 or 800x600 in 256 colors, so the look of the pixels did matter :) 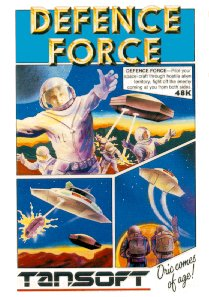 Defence Force (1983)
In 1998 AOL decided to expend and swallowed HOL, resulting in the disappearance of all the HOL urls and emails.

Having already gone through the process of signaling email changes to all my contacts each time I changed ISP, I decided this time would be the last and looked at having my own domain name.

I quickly discarded things like "mickael pointer.com" or "dbug.com", which I found a bit pretentious, and decided to go for something not related to me as an individual person.

After some brainstorming, I selected the name of my favorite Oric game at the time, which is how I ended up choosing "Defence-Force".

A ".org" was chosen because I was not planning to do anything commercial about it1. 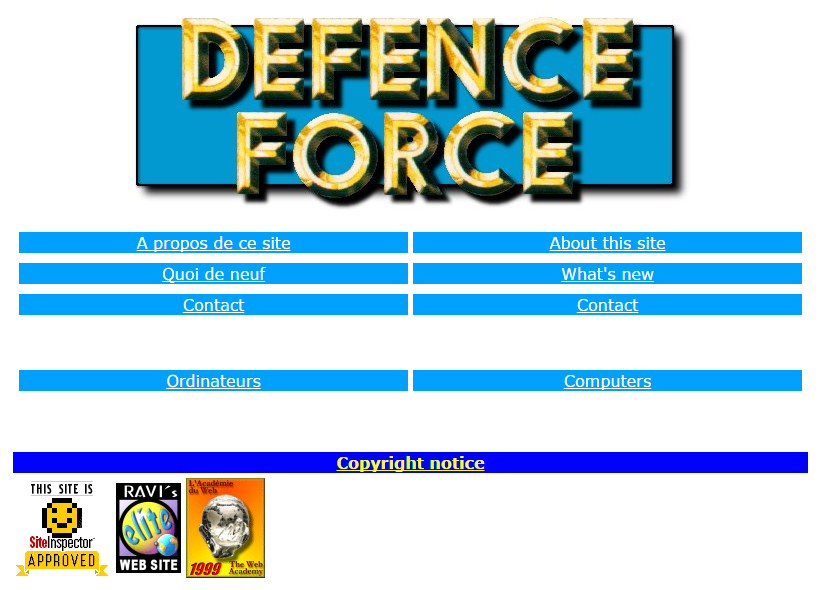 http://www.defence-force.org (1999)
This versopn still have some remnants of the times past - awards, link exchange, guestbooks, ... - but there was a certain number of design decisions that made this page stand out compared to most other sites of the time.

First it had a pure white background.

That may seem obvious now, but 20 years ago almost everybody was either using black backgrounds or some textured background image like stucco or plaster imitation.

Another major difference is that I used the Verdana font while many sites were still using the default Times New Roman or other serif font displayed by the web browser by default.

And finally, the major difference is related to the navigation with the dual french/english column layout and navigation bar at the top. 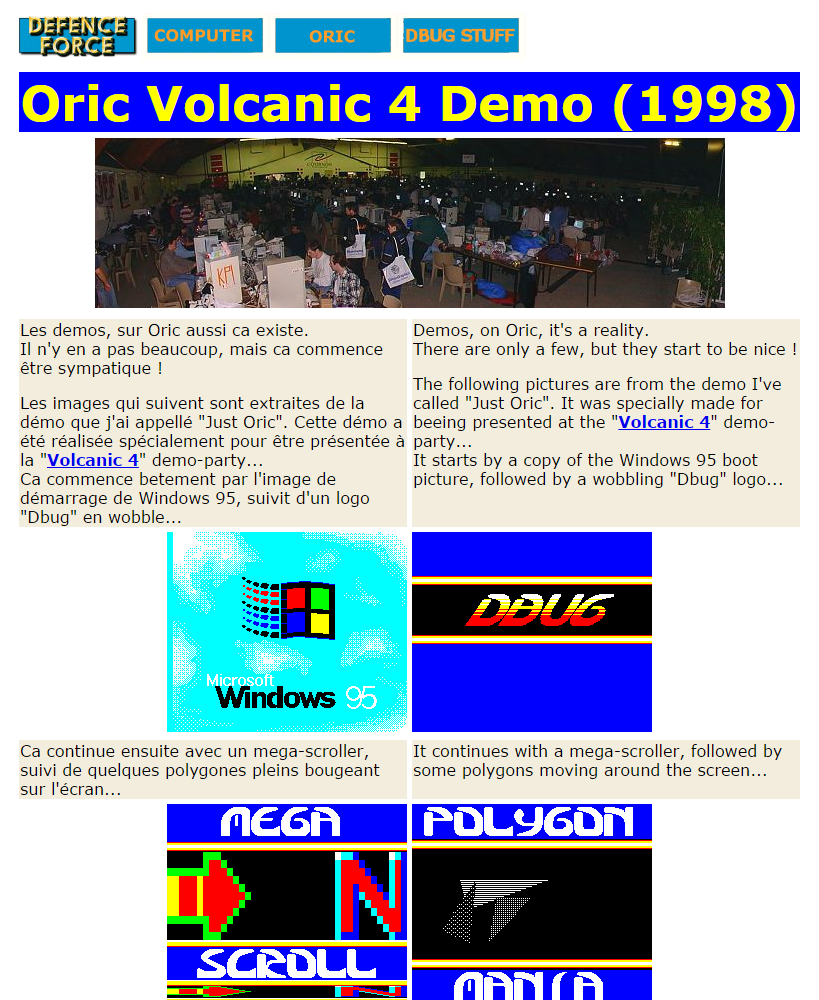 Volcanic Party (1998)
Retrospectively it was a major pain to maintain, everything was hand written and the grammar correctors and translation services were not what they are now, so the more content I added the more unmaintainable it became.

The main reason for the presence of the dual language is that a significant proportion of my readers were French people, which in my generation were not particularly good at reading English.

Since the big revamp of 2009 I've switched to English for everything I did, with one notable exception: The 30 years Oric anniversary blog exists in both French and English versions.

Most of the Oric communication was happening on Usenet, in particular in comp.sys.oric, but over time it became harder and harder to get a free access to Usenet so I decided to have a forum available for the Oric community.

By this time Defence-Force.org had been running continuously for almost 10 years, I guess people were confident it would not be another of these sites appearing and disappearing in the blink of an eye so it became a relatively successful place for technical exchanges regarding Oric programming or hardware.

I did not want to get into concurrence with all the game related retro-sites, I wanted to limit the problems of administration and moderation to a minimum :) 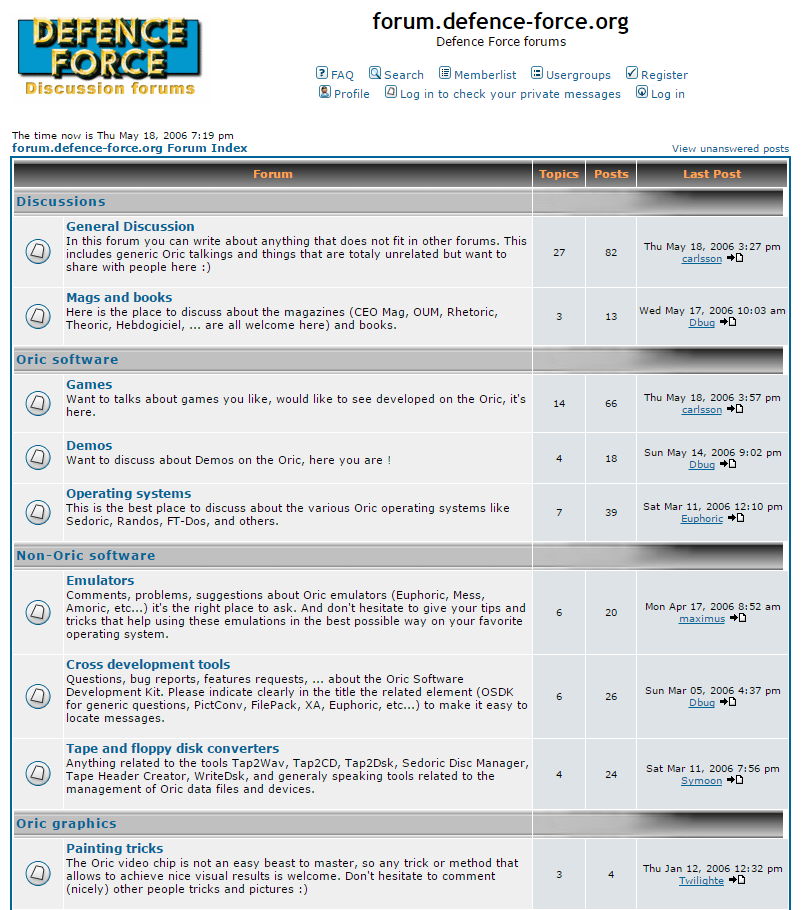 I would not assume that the 411 members are all active, probably half of them are bots or people who joined and then forgot their passwords!

At some point the threading model became inefficient to handle some of the information exchanged in the forum, so I also provided a wiki, originally mostly used by Twilighte to document his work on the sound chip. 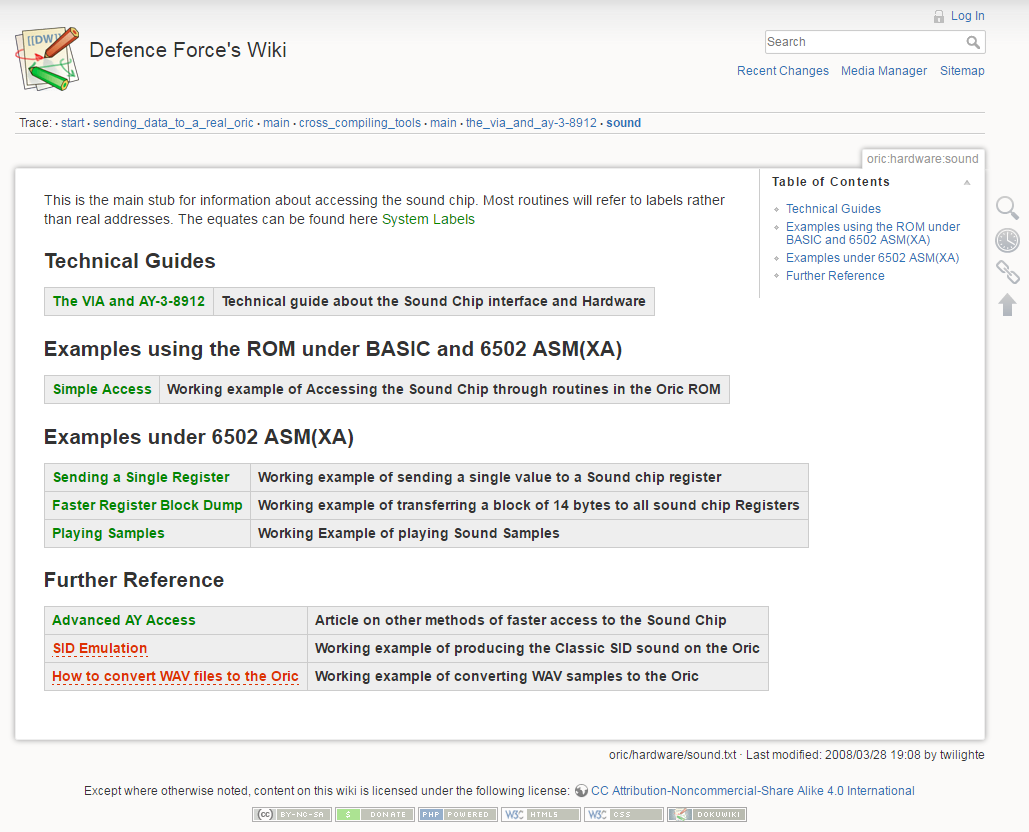 http://wiki.defence-force.org (2007)
The wiki is still actively used, and recent pages have been dedicated to the tape loading routines, disc file formats, telestrat, ...

Around 2009 I completely abandoned the main Defence-Force site and instead started to use the blog format to communicate.

As already written before, I originally used WordPress, then switched to my own blog system, which I then later extended into other subdomains like osdk.org 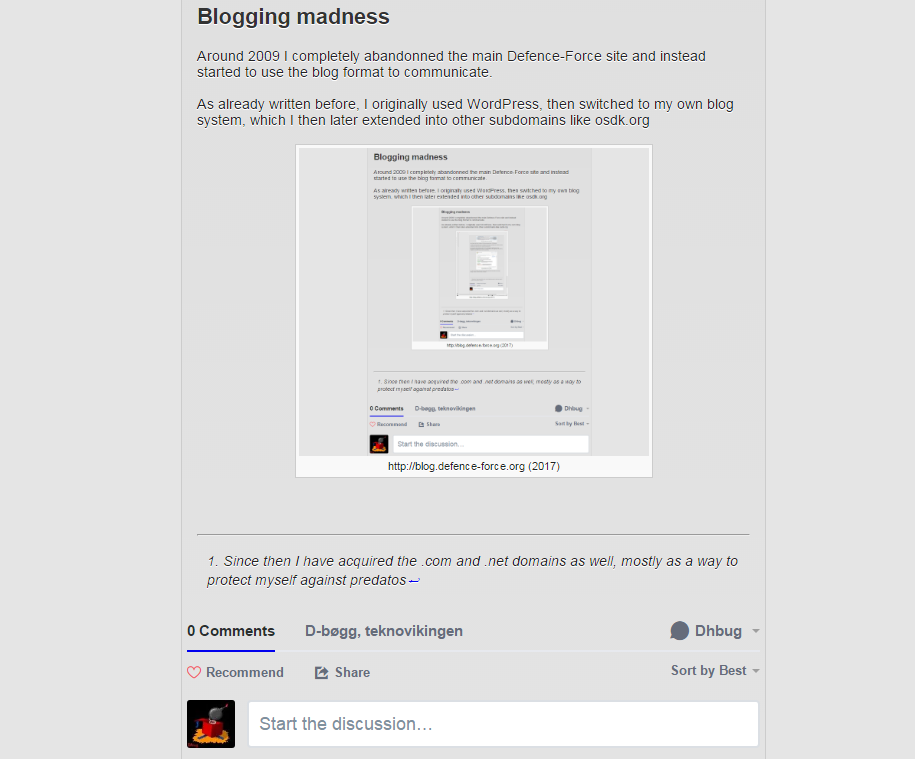 http://blog.defence-force.org (2017)
Yes I know, it's a very puerile screenshot.

The Oric Software Development Kit is probably the reason behind my ability to release Oric software quite fast when I need it.

Again I will repeat it: All credits for the original Oric C Development kit goes to Alexios Chouchoulas, Vaggelis Blatras and Fabrice Frances.

My own contribution was to take what they did and iterate over it, we would not be at this point without their original work! 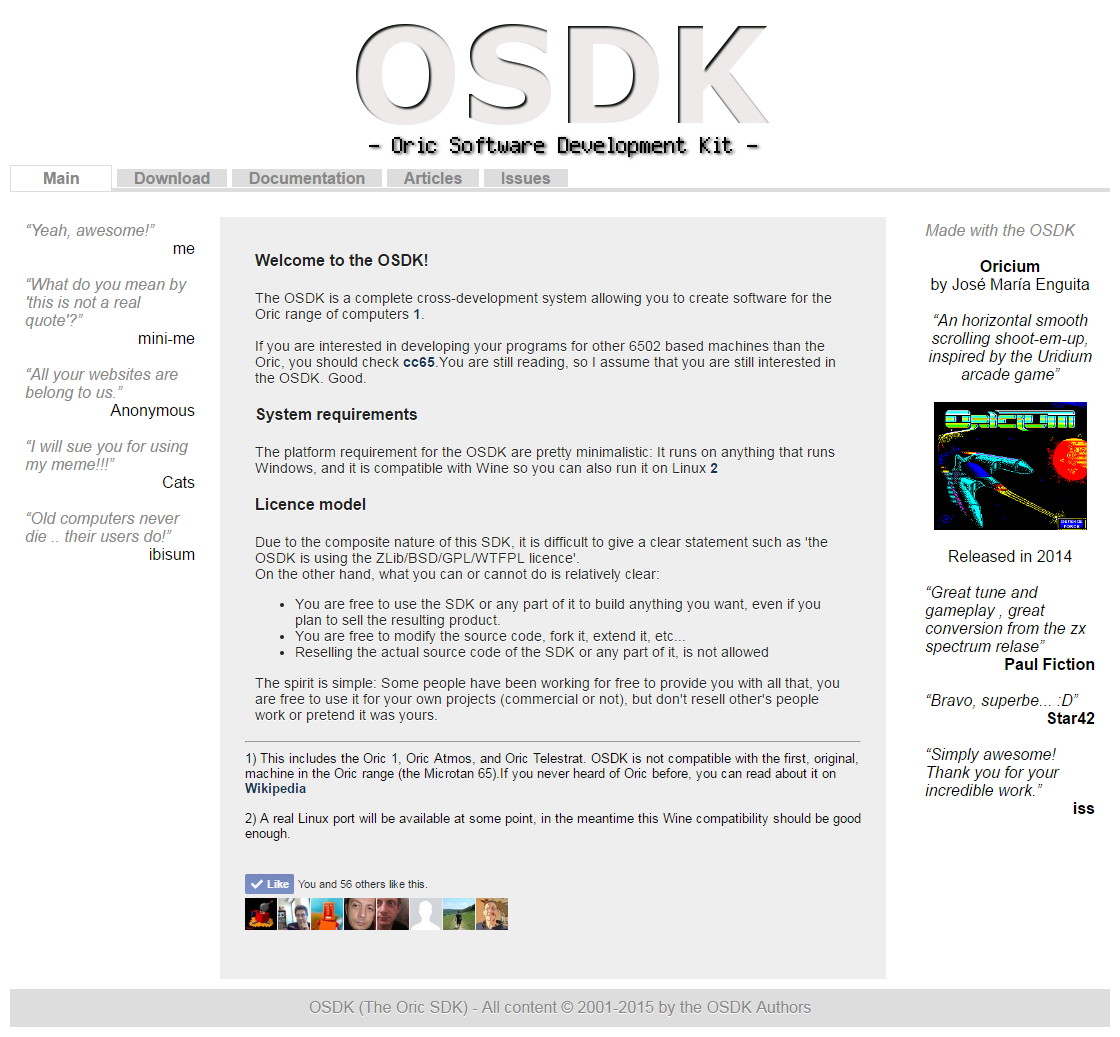 http://www.osdk.org (2017)
One of the most satisfying things is to know that the time I spent keeping the tool chain updated, answering questions, providing fixes and improvements, has allowed a number of people to release some very cool games and demos for the Oric.

Since 1997, about 90% of all Oric demos2 released in parties have been by Defence-Force.

In this context, Defence-Force is more like a record company label, it does not map to a fix number of people. It's just a convenience used to be able to get stuff released.

If you look at the credits of our productions, you will see that the following people have been "members" of Defence-Force at a point or another:
There will probably be more, maybe you, who are reading this!

I will not link any of the demos or game on this article, this was already largely documented in the previous series or articles about the software I wrote.

20 years really is not that old, but I do know some people who were born *after* my site was made available.

In two years Roy Batty will be telling the following to Deckard:

I've seen things you people wouldn't believe.
Attack ships on fire off the shoulder of Orion.
I watched C-beams glitter in the dark near the Tannhauser gate.
All those moments will be lost in time...
like tears in rain...
Time to die.

I could probably write something similar in spirit, regarding the various "standards", languages3 and frameworks, web sites and applications, services and search engines, browsers and mailers, over the year.

Each one having its brief attempt at becoming the next big thing until dropping in the chasm where all the brilliant ideas go dying :)

Long term perennity is one of the reasons that made me very conservative regarding the type of technologies I invest my time into.

If all you do is fire and forget websites or products, jumping on the latest fancy technology is perfectly fine.

But if you are going to maintain what do for a number of decade, you better chose something maintainable that will stay usable for a long time after you started using it.

1. Since then I have acquired the .com and .net domains as well, mostly as a way to protect myself against predators↩
2. Greetings to Triple A, mmu man, CMPI, g0blinish and KS348↩
3. Does anyone remember 'miva script'?↩