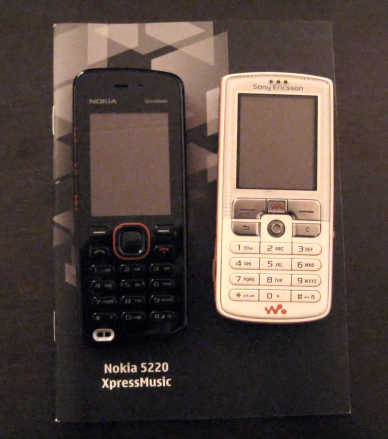 My very first mobile phone was a Sagem MY X5m, but when I moved to Norway it was not really up to the task, mostly because the battery life was almost gone, but also because the T9 did not have support for Norwegian (I don't even remember if it did English). So I got a fancy Sony Ericsson w800i for my birthday. Apparently it was a fancy present because it was kind of hard to get one, most shops were out of stock.

So anyway, I got this Sony mobile, and I've been kind of annoyed by a number of problems, but globally, in more than three years of usage I can say that it was a pretty good mobile. So for the record, here is what I think about the w800i:

The positive:
The negative:
If you want an example of this latest point, let just point out the retardness of the T9 handling.

First obviously every single people's name is part of the T9 dictionary. Else it would not be active when you add contacts names. Well of course no, people's name are not in it, so you disable T9. Then you enter then name. Unfortunately the enable/disable flag is global to the phone, so you have to re-enable it when you want to send a SMS. It is really something minor, but why oh why not testing this kind of thing ? And why can I change the wallpaper, themes, colors, ring-tones, ... but I cannot select which dictionaries I want to use ? Is it too complicated to not want the Finnish dictionary, but to want English, Norwegian AND French ? That's basic usability 101.

So yeah, this mobile was my basis on which to compare other mobiles. After doing a quick analysis of what my collegues used, I had to reach the quick conclusion that Apple's been doing their job well: The number of iPhones is insane. Personally I'm unimpressed by the iPhone: It is large, it is heavy, it is expensive, finger prints sticks all over the place, ... nice design, but not for me.

Then I got a phone call from my phone operator, offering a special subscription (better than the one I had) with a mobile for 1 kroner. Sounded like the perfect occasion to test some other brand of mobile, at worse if the phone sucked I could still use the w800 :) This is how I got the new Nokia 5220 ExpressMusic.

On the paper it looked nice; after reception the mobile itself looks nice, it is slim, quite light weight, nice shape, nice colors, standard mini-jack for the headset, microSD card for the music, small usb cable. So far so good.

Now well, I've been using it for a bit less than a week, and so far I found out the following:
That's all that comes to my mind for the moment, will update later :)