This year the theme was: Ritual

I have to say it did not inspire me at all; that had an definitive impact on my motivation, and ultimately on the final result.

GGJ 2016 - Oslo logo
Like last year I wanted to make an Oric game because it's fun, I know the platform, and it does not hurt to release more games for this machine anyway :)

I originally started from the code of last year's Jam project, but I ended up with only a minimum amount of reuse1.

The game I finally came up with is a kind of interactive text adventure, a bit like the "adventure books" where each section asks you a question and depending of your answer you have to go to a particular page.

The main difference here is that the story is about me, and generally speaking about the daily routine most of us go through day after day.

The event was still hosted by the Westerdals Oslo School of Art, Communication & Technology, but the organization was slightly different from the previous year.

There were more people than last year, but fewer games2 released, and most of them were not as good as last year in my opinion:

I think most people did not really like the theme, because it was the type of word that locked ideas in your head almost immediately (religion, invoke monsters, ...) which made it hard to find a genuinely interesting idea.

Like in 2015 most games were written using the Unity engine, one used Game Maker, one was written in Unreal Engine blueprints, and one was just some html form with some javascript to check the content.

Since it was in the same room as last year, we were also using the same tables and chairs; without surprise my back was painful during all the week end...

My Typical Day In Oslo 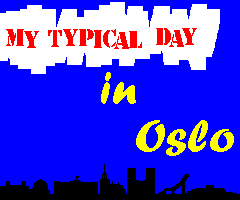 My Typical Day In Oslo - Title Screen
I first tried to find an original idea.

Two hours later I was still trying to find an original idea.

One hour later I decided to be lame and just do a variant of last year's game, that's how Weekend in Oslo became My Typical Day in Oslo...

Of course the game itself is totally different, there are no graphics, no score, no game over... actually the game never ends.

The main idea is that our life is made of small rituals that we repeat day after day, week after week, month after month, year after year, with little variation, until we finally die.

What this game simulates is a typical week in my life, from wake up to bed time, through the morning rituals, going to work, evening ceremonies... rinse and repeat.

I did manage to add to the challenge trying to get as many diversifiers3 as possible: 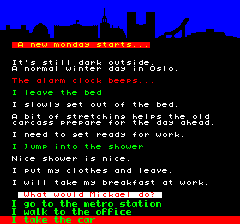 A typical monday morning
The first one, well, it's about my life in Oslo.

For the second one, it's mostly a quiz game without any violence at all.

For the third one: The game is played with only three keys - UP, DOWN, SPACE.

The last one should be evident as well: The whole game is an uninterrupted flow, there are not even option menus or high scores, it automatically starts when you boot the game.

You can get the game source code on my SVN repository.

You can also download the game preconfigured with a working Windows4 emulator.

Here is a bullet point list of what I think did work well:

Let's do the same thing with what did not work that well:

1. Most of it being the FloppyBuilder and OSDK core systems↩
2. You can see the list of games on the Oslo Global Game Jam page.↩
3. Additional mini-themes you can use to differentiate your game from the others↩
4. If you are not using Windows, then download one of the other versions of the emulator↩