Checking the compression on cylinders can give you a good deal of information about the health of an engine.

The idea is simple: You remove all the spark plugs, you put a pressure gauge in one of the holes, and you try to start the engine which will move the pistons and in turn compress the air in the cylinder you are measuring.

You can then compare the value to the manufacturer values: If they are close to the standard values it means your engine is fine, if there is some variation it means that air is leaking from somewhere, which could be cause by worn out segments around the pistons, a broken head gasket, or problems with valves not closing properly.

You can then get a more accurate diagnostic by doing a wet test: Before taking the measurement of each cylinder, drop a bit of engine oil in the cylinder. This will temporarily create a seal around the segments, if the compression value improves it means the segments are worn out1.

In our case, the official Volvo documentation for the B18A engine told us we should have 11 PSI per cylinder. 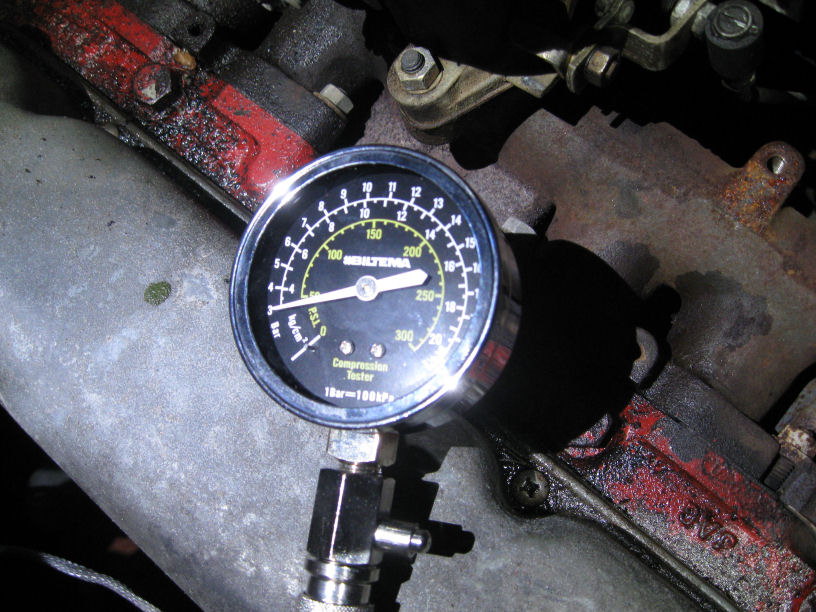 Not bad for a 49 years old engine.

Third cylinder... the needle did not even move

So basically we were running on less than two cylinders, no wonder we had a lack of power.

We had to do something about it.

We knew that Olav Teigen2 had replacement parts for the engine top; the normal replacement, and a variant with stronger valve seats that allows to run with normal unleaded fuel.

The new top
After some discussion we finally managed to get the car to their workshop, with a list of all the small things we knew should be fixed, and asked for a quote.

The mechanic told us that the head gasket was definitely dead; that was the main reason why we were leaking cooling fluid.

The engine top and valves were not in very good shape either.

One week later we got the car back, with a replacement top, the missing screw for the carburettor replaced, and a steering wheel damping system installed3

On the trip back it seemed that the performance of the car was an order of magnitude better, and definitely worth the price.

Still we had no idea about the impact on the fuel consumption, so we decided to do a trip in Sweden.

At about 130 km from Oslo lies Charlottenberg, a small Swedish city that most Norwegian people knows because of the quite large shopping mall that stands there.

On Friday evening we were at the gas station, made sure the tires where at the correct pressure, checked the oil and coolant level.

On Saturday morning we left for Sweden, and less than two hours later we were on the parking of the shopping mall.

Back in Oslo we were able to do some computations, and indeed there was some significant improvements:

As far as I can remember, my dad has been converting vans to camping cars5.

With his current one he has been travelling from France to Greece, coming back through eastern Europe and back to France.

Last year proved us it was possible to sleep in the car6, so we decided to push the concept to its logical end: We will convert the car to a mini camping car.

At a minimum we need a bed, some storage, light, and equipment to keep and prepare food, but that will be for the next episode!

1. Which is a very bad thing because basically it means opening the engine which requires quite a lot of manual labour.↩
2. A company around Drammen, that specialized in military vehicles parts.↩
3. In the default configuration a large stone or pot-hole could lead to the front wheels turning violently, which could result in a broken wrist or finger due to the steering wheel turning violently as well↩
4. That's still a lot, but the carburettor and engine top need to be readjusted in about 1000 km↩
5. Also called RV or Bobil depending of which country you are coming from↩
6. I did it both during summer at Solskogen, and during winter at Kindergarden↩