Are Cheap Androids An Electric Dream
Mon 16th May 2011
Gericom Webgine 1400Asus eeePC 901Possible optionsTablets with keyboards?Android netbookAfter marketPost-upgrade feelingState of Android
Last Christmas was tough on my netbook. The travelling around, the trains and planes being cancelled or delayed, the packing and unpacking, the plugging and unplugging, and the occasional knocks finally killed my good old and trusty Asus eeePC 901.

More exactly, the screen decided to die1.
Came the time to look for a replacement, dictated by the usual set of parameters to consider: cost, form factor, autonomy, ruggedness, planned usage, look.

2011 is a particularly rich year in this regard, due to the crossbreeding between the netbook, laptops, mobile phones, pda and tablets. It's getting harder and harder to try to put these various devices in distinct categories, I'm not even going to try to do that so please bear with me: As far as I'm concerned, all these devices are potential candidates.

I guess the best way to find out what I need, is to look at what I used to have, and find out from there what was good and what was not good. 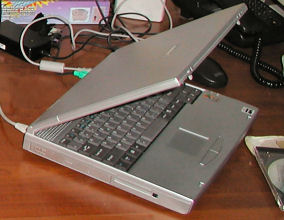 Fat and slow, but it has served well
My first laptop was a 14 inch Gericom heavyweight. At least it was in the heavyweight category from a weight point of view because performance was not its forte: You can't really expect a super cheap laptop that use a desktop version of an AMD processor to be super efficient at anything, or could you? So basically, it was "transportable", the autonomy was pathetic due to the crappy battery and the desktop based processor, and it was freezing due to overheating during the summer so I had to buy one of these cooler support tablets ;)

There was at least one positive thing: It was possible to use the machine for real work, either document editing, programming, debugging. 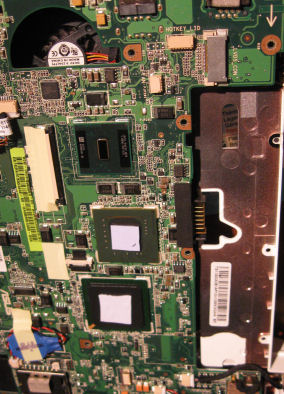 The inside of a eeePC 901
The eeePC on the other hand was small, silent and sturdy (I had the SSD version), a very practical small machine to keep in your bag when travelling around, and the battery life was good enough to allow watching few full length films when travelling. That's nice.

The negative things, well the machine was slow (mostly due to the Physon SSD2), the keyboard too cramped (impossible to do long sessions of text writing, either using instant messaging, so forget about programming or writing a blog post), the Intel graphics being as usual unusable for anything other that displaying basic visual effects.

In the end, all I was using this machine for was browsing web pages, using IRC, talking with friend, and watching films.

The market has now changed quite a lot. The traditional desktops and full-size laptops are still available and provide the same type of experience as before, the netbook category is well alive as well, but these days it's the smartphones and the tablets that are on the front pages of most tech sites, and of course the multiplicity in terms of operating systems is larger than ever.

The easiest choice would have been to buy a new netbook. The prices have gone down, so basically for about two third of the original price I would have got a similar machine, but with a dual core Atom, twice the amount of memory, ample storage size... and still a shitty Intel graphic system.

On the next price range we find the basic full-size laptops, cheap but heavy as bricks.

Then come the tablets and smartphones. Light, good battery life, but can you really do anything useful with iOS and Android, on what is basically just an internet enable touch screen?

Finally comes the top of the range laptops from Apple, like the MacBook Pro and Air.

As if we did not have enough options already, at the last CES the various hardware vendors decided to bring on the tables the (possibly) best of both worlds: Tablets with detachable keyboards.

Since these machines were not available, I searched a bit more about Android with keyboard, and I discovered this very intriguing machine from Toshiba, the AC100.

The AC100 is a very special machine.

Basically it fits in the same category as a normal 10 inch netbook, except that it does not run on Windows or Linux, and it does not use an Intel compatible processor. That means you can forget playing any windows game or generally speaking run anything that expect x86 compatibility.

I admit that it's a bad start.

If you search for reviews on the web, written when the machine was introduced late 2010, you will find out that the grand majority are giving less than the average and some even less than that (The Register gave it 10%).

That looks even worse, isn't it?

The interesting thing about these reviews, is that they basically all agree that the hardware is great, the machine is very snappy, the Tegra 2 chipset allows for very smooth display, the screen is great, it's possible to watch 1080p videos (that you can watch on an external screen thanks to the hdmi connector).

The problem is that this machine was released with Android 2.1, does not have the Android Market, the unusual screen size and lack of touchscreen makes many application go hay-wire, and it did not even support flash. And the system was buggy too. And the web-browser did not always work.

I can understand the bad reviews, no hard feelings, too bad for Toshiba, and this probably hurt the possibilities that other companies try to do similar Android netbooks.

I guess at this point you are wondering why I spent so much time describing such a failure of machine. The answer is simple: I bought one, and I'm very happy :)

When this machine was introduced, it was sold as a full price machine, at roughly the same price as normal Atom powered netbooks. Some people noticed this pretty nice and small machine, bought it, tried to use it, screamed, and brought it back to the shop for a full refund.

Then comes me, looking for the prices of various machines in the shop next door, and found out they had a pile of these machines, already used, with a big "slashed prices/must go" sticker. And indeed slashed it was, I paid it nearly half of the price it had the month before3.

Of course, a turd is a turd, even if you got it for free.

When I plugged the machine, I indeed quickly realized that the default setup was sub-optimal, and that yes the machine was not very usable, but I gave a try.

That's when the magic happened! After configuring the wifi and performing the registration sequence I was able to run the Toshiba Updater system which quickly decided to update itself. After this update phase I had the pleasure to discover a whole list of new available upgrades, including Android 2.2 (Yeah!), Adobe Flash support (Yeah!!), Multiple Keyboard Layout support - including norwegian -, updated Media Player, additional Market place software, Office document viewer, etc... 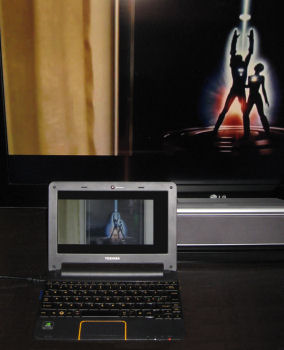 1080p on external HDMI
After this upgrade, what was true about the hardware is still true: It's a very light machine that feels comfortable to handle, with a very good screen and a perfectly usable keyboard. The touch pad is reactive and can be disabled by pressing one of the built in keys4. The battery life is quite good and charges fast as well.

Basically for less than the price of the cheapest netbook I could find, I have a machine that can comfortably browse webpages - even when they have flash -, supports Skype, IRC, Remote Desktop, can play Angry Birds and a bunch of other games at full frame rate, supports an external mouse and usb card readers (it also has a built in SD card reader), can play all the movies I had (including multiple gigabyte MKV and AVI files). Google maps also works fine, and you can use DosBOX as well. (Apparently it can also access samba shares, use ssh, can play Spotify, but I did not try).

What it cannot do, is basically allow me to program on the fly, but this was not doable on the eeePC either, so all things considered it's a choice I would do again.

Now clearly for me it showed that the state of Android today is a bit like at the DOS far-west period when you had to make sure that each and every application would actually run on your particular system. You had to have to good type of video card, a compatible sound card, else the applications would misbehave to simply refuse to run at all.

For this machine it's the same thing: A number of applications expect the screen to rotate freely, they expect a touch screen, some expect a particular screen size or aspect ratio, some expect a gps or 3g module, etc... so a significant number of applications will not work on this particular machine. But the one that work and can exploit the machine are really flying: All the recent 3d games are running perfectly smoothly in landscape format.

Hopefully developers will learn to stop assuming things and write correct code instead. The future will tell!

1. Technically I guess we can call "showing the same scanline repeated all over the screen" as "not really usable anymore.↩
2. If you have one of these machines, I can recommend the Renice mini PCie SSD cards, it's like over-clocking the machine, you will not recognize it: Everything opens almost instantaneously.↩
3. Which for the sake of comparison means I paid for it one tenth of the price of an Apple MacBook Air in the same shop.↩
4. You also have keys to change the screen brightness, volume, bring the list of running applications, disable the wifi, play and pause medias...↩