How to learn linux by setting up a server
Mon 23rd February 2009
As some of you already know, I decided that Windows Vista was not for me. The number of things that displeased me from Microsoft was large enough to make me seriously consider changing entirely of operating system. Which is why I considered Linux: Mac OS seems cool, but jumping from a proprietary system to another one just seemed very silly.

So anyway, in the few last years I tried a number of distributions, including but not limited to Knopix, Sarge, Suze, Ubuntu and Xandros.

My favorite is by far Ubuntu, not because it is any better, just because the documentation and help from the community is quite good, and the whole thing mostly work for my purpose.

I'm not a "pure free" person, and yes I want the nvidia drivers and the ability to play mp3. (Knopix was a nice introduction to the live cd concept, Sarge seemed powerful but way to hardcore for me at the time, Suze was a miserable waste of my time1, Xandros was what came with my eee PC 901 and was replaced by Ubuntu + netbook remix something like 2 hours trying to see what was doable with Xandros: Nothing). 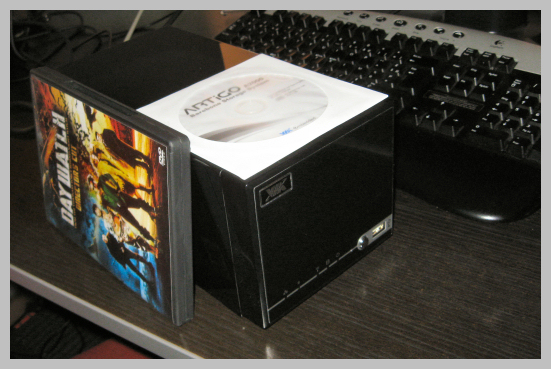 Via Artigo A2000
That being said, after having tested first Ubuntu 6.06 on my old Gericom laptop and found it to be usable, it actually stayed on the machine for about one year, just used for doing irc and instant messenging while I was playing on the Windows box.

That was the first time ever a Linux distribution stayed install on one of my machines for more than 3 days.

Call that an achievement if you want :)

Later on, when I had to reinstall my main machine (after a dramatic hard drive crash), I decided to do a dual boot XP/Ubuntu, then later I got my eee PC that worked great with Ubuntu, so it comes as no surprise that I choose Ubuntu for my own personal file server.

The reason why I needed a server is that my existing web hosting company can't provide support for a svn server, and despite some email exchange with the support people I was told that "they would consider the request". Since I wanted to have a source code repository for me and other people working with me on hobby projects, I reached the conclusion that doing it myself would be faster, and I would learn something in the process.

So here I am, building from scratch a file/svn server using Ubuntu.

Have to say that it is at the same time easier than expected, but also full of small things that if you don't know, will bite you later on:
Anyway, after few hours of research I had an entirely running machine connected on the internet, with fixed ip (using DynDns), serving web-pages (using Apache) and versioning (using SVN webdav interface), all being backed-up (with Jungle Disk).
The whole is controlled from my other machines using VNC.

The machine itself (VIA Artigo A2000) is very small, it is one of these fancy mix between computers and nas. It runs with 2 gigs of ram, a 16 gigs compact flash (on which the OS is installed), plus two disks of 750 gigs to store the data.

1. I got the 6 CD's from the Officiel Linux Magazine, and all I got was a distribution that self destroyed at the first call to Yast.↩