Mind you, I'm not done with the game: Since you can't continue to play after reaching the end of the main story line, I loaded a previously saved game to explore parts of the world I did not visit yet (I picked-up the Adventurer Perk just to get the list of all locations), which is about half of the possible locations.

Talk about a huge game 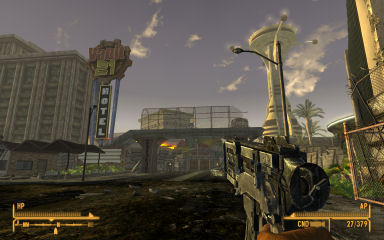 Welcome to the Vault 21 hotel!
It's hard to play Fallout: New Vegas without doing comparisons with the previous episodes. How does it compare to the original isometric games (Fallout 1 and 2, and possibly the strategy game Fallout: Brotherhood of Steel), or to the more recent full 3d Fallout 3?

When the Fallout licence was acquired by Bethesda Softworks who soon after announced was working on Fallout 3, the blogs and forums started to look like battlefield.

Some people were expecting Fallout 3 to be awesome, generally from people who loved Oblivion and never really played the original games. Most of older players assumed that Fallout 3 would be a disaster, a “Oblivion with guns”, and certainly not a true Fallout game.

Well, I guess everybody's point of view was actually correct: Fallout 3 was actually a quite good post-apocalyptic first person adventure game in which you could recognise some core elements of the Fallout universe (super mutants, brotherhood of steel in power armors, nuclear waste, bottle-caps as money unit, etc…) while still not really feeling right as a Fallout game.

Just to make it clear, I'm one of these persons who love Morrowind, and really think that Oblivion is a terribly broken game in a terribly boring setup, so I was expecting the worse for Fallout 3.

When I finally played it2 I found the game actually quite good: All I had to do is just not trying to think of it as a Fallout game.

More of the same?

I think I would not have found what exactly was missing to Fallout 3 if I did not have the chance to play Fallout: New Vegas. The fact the engine is exactly the same, that the visuals are very similar to the original game, that the GUI and basic mechanism are also verbatim, makes the comparison very easy, and shows the difference between Obsidian and Bethesda when it comes about game design. No suspense here, I think Obsidian really outshines Bethesda.

What's very obvious from the start is that New Vegas is less forgiving. In Fallout 3 most encounters are non lethal, the consequences of your choices are very obvious on the short term, and everything is manichean. You always know if what you did was GOOD or EVIL. For example the slavers are bad guys. And the survivors in the small village are good guys. No discussion, no polemics, no possibility that you may have it wrong. Life is simple: You are with me or you are against me.

In New Vegas things are not that simple. Your first encounters tend to be your lasts, and you fast discover the virtues of running. There are these characters that are helping you, but you have this nagging feeling that they have their own agenda. Should you really trust them?

Then you have the factions. In Fallout 3 you have few groups and communities spreads over the Washington DC area, but they don't really have any link with each other. Helping or fighting the Brotherhood of Steel is not going to impact your relations with any other group. It's really like if Bethesda had each area of the game designed by separate groups of people, each one making its own self contained adventure area on the map.

In New Vegas everything is interconnected. You have the obvious big Factions (like the NCR and the Legion), but as you play you discover a myriad of smaller groups (Boomers, Kings, Vipers, Powder Gangers, etc…) that are loosely related to some other groups. The way you handle them may have large consequences on the way you can solve some of the quests you are doing for some factions. And up to a certain point you can do work for a number of opposing factions at the same time, which give an interesting twist in the way you solve things, instead of just a binary choice: Will I work for this group or for this other group.

The end result is that you feel much more involved in what happens, the world feel alive – with people having real troubles -, and the various branches in the story line keeps you interested.

The sheer number of places, hidden stuff, remote locations where event happens that you would not even have known of if you were not just exploring around is just the icing on the cake. 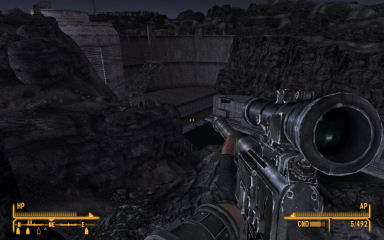 I don't give a Dam about what you are thinking of my puns.

Bugs, did you say bugs?

Yeah I know, I'm working in the video game industry, been there, done that. Had my share of “sorry it's not finished but we have to release it now in time for the quarterly reports, we will release patches later” projects. Sucks when it happens.

Anyway, in this particular case, I've been lucky enough to play the PC version, and the patches to solve the various animation glitches were released before I started to play, so I've not seen the random rotating heads and other scary animation bugs.

What I've experienced in 70+ hours of play:
That's about it for the engine bugs. Since I tend to be a serial-quick-saver I was not too much impacted, specially with the game loading quite fast.

There was some more annoying problems still, mostly in the scripting of quests.

In a number of occurrences I had some missing or wrongly positioned quest markers on the map, meaning I had to run around for a while before finding who I was looking after. Some of the dialogues also were not clear, leading me to choose exactly the opposite of what I wanted: very annoying when it is related to the main quest.

One of the quests was particularly badly handled (one involving sabotage), where I guess the idea was to show the player that they did something wrong, but the way is done is so bad that it looks very much like you can fix the problem but that it's just game being buggy. Since it was a minor quest without any real consequence I just moved along, but that was frustrating.

Well, I pretty much enjoyed Fallout: New Vegas. I think the game is brilliantly done, with a real dedication in the execution.

I wish I will one day have the opportunity to play another game by Obsidian, but this time one that has not been rushed out, and where the QA department was actually able to spend the time to test things inside-out.

Upgrading the Gamebryo4 engine would also not hurt. It's really showing its age: Objects that jump from the shelves was funny 5 years ago, but since then the expectations for a physics engine have kind of evolved. And remove the invisible walls too, they are very annoying when you explorer.

If you draw a graphic with on one axis the deepness of the experience in terms of choices and consequences and on the second axis the degree of apparent polish in the execution, the result would probably put these games on diametrically opposed positions.

The recent tendencies have been to make dumbed down games where you basically have only fluff decisions that have literally no impact, you could just move forward pressing the fire button or the enter key and the whole game would reach the end. That's just sad.

Give me more games like Fallout, but let them be polished like Mass Effect
In conclusion: A highly recommended game – if you can live with bugs.

1. Thanks Steam for keeping statistics about everything.↩
2. when it was released on PC as the Game Of The Year version, because Bethesda games are always terribly buggy – so you better wait 6 months for all the critical patches to be released – and they always release downloadable content that finally get bundled together in a nice updated version.↩
3. Or reading my blog and not finding grammar/syntax mistakes.↩
4. Looks like Emergent is in bad shape, so they may have to do that anyway↩