Yes! I arrived in Norway the 2nd of May 2005, so this Sunday marks my five years anniversary in Norway. I think it's about time to do a quick look back, and possibly discuss what I can see coming next.

Some people asked me why I moved to Norway in first place: was I unhappy in France, why not moving to USA or UK, if I was planning to come back to France one day - and when -, etc, etc... 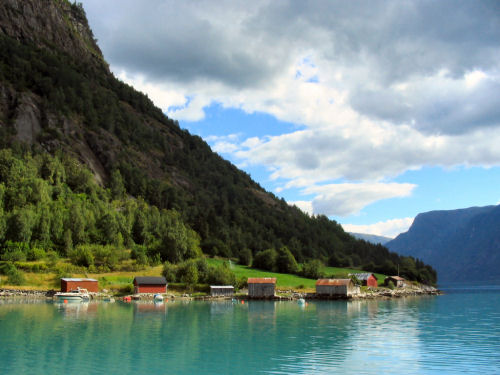 Fishing houses in a fjord

It all started with the demoscene1: I've been to a number of demo parties hosted in foreign countries, like Function (Hungary), Assembly and Alternative parties (Finland), Little Computer People and Floppy (Sweden), Error In Line (Germany), STNICCC (Holland) plus various computer trade shows here and there. By travelling out of France and spending some time with other people in different locations you really open your horizons, and sometimes you get this "I could really imagine myself living there, I really like it" feeling. I had this feeling about Norway when I spent a few weeks during the summer 2004.

Then in the beginning of 2005 I was involved in some unpleasant events in the company I was working at the time2 and after about seven years working there I decided I had enough. I announced my decision before even checking if I could find a job somewhere else.

Of course I started by looking in Lyon for possible jobs, but I quickly realised that I was one of the top most paid game developers in Lyon, and none of the studio there could match the salary I had at Eden3. The conclusion was simple, either I had to change job or I had to move out from Lyon. Since working in database or bank applications was not really a super exciting prospect I had to move out. If I really had to move out from Lyon, why not just take the opportunity and get the most of it: I sent my resume to Funcom, two days later I had a phone interview, three days later I was in the plane for a meeting with a showing of the place and a coding test, and I came back home with a written proposal. Yeah baby !

The reason why Funcom had no problem hiring foreigners is quite simple really: Norway at this date has less than 5 million inhabitants, the country itself is quite large, so you can say that in the Oslo area4 at a maximum you have 1.5 million persons. That's obviously not a large pool of people, so if you are looking for hundreds of experienced game developers, designers, artists, etc... you quickly realise that you need to hire foreigners - many of them.

The next three months were kind of stressful, trying to cleanly finish my work at Eden (documenting, cleaning the source code, adding the last minute features requested by people who should have known better), organizing the moving out (selling furnitures, packing what I wanted to keep), the worries about the challenge to come, getting informed about every-day's life in Norway, all that was balanced by this excitement of knowing I was doing a big jump in the unknown - after all I never worked in a non French speaking place before -.

The first month in Norway was not particularly relaxing either. Everywhere I faced my inability to understand and speak correctly English, I had to make people repeat or speak slowly, and most people would not understand what I said - but most were able to say I was French after I said one single word: "Hi!" - kind of depressing really. During this first month I also had to go to various locations to get my work permit, my personal number, bank account, search for a place to rent, etc... at work things were not much better since I arrived just before the E3 crunch5.

Survival of the fittest

This first year was really an exercise in adapting to the differences between France and Norway.

In many ways France and Norway are similar. They are both countries where you have high taxes level and state paying for things like healthcare and unemployment benefits. Oslo is about the size of Lyon, and feels about the same: It's not too small and it's not too big either. You can go from most places to others by foot. It's not a megapole like Paris or New York.

The things that may be the most difficult difficult to get used to is the length of the day in summer (in Oslo you can be out in the sun from 4 AM to 11 PM, great for barbecues in the park!) and winter (it's dark when you go to work, it's dark when you come back from work). Then comes the cost of life: Food, alcohol, housing, cars, cigarettes, restaurants and other night places, hair dressers, are incredibly expensive. Even with the higher salary, if I had wish to keep the same activities as I had in Lyon, I would just have gone bankrupt. Now, some of the things have almost the exact same price (converted currency) as in France, making them in practice ultra cheap. Examples are IKEA furnitures, computer parts, high tech gear.

After a while you just adapt. You know the opening hours of the local Vinmonopolet, you find the places that are cheaper, you change your way of life - instead of going to a restaurant you go in the park with some friends, an engangsgrill a pack of beer and few things to grill -, you get some thick dark curtains for the summer, and you get through the winter using advanced technology such as sun simulation lights and omega 3 pills. The snow is annoying only if you don't enjoy it. I like the white landscapes, the snowboard and going out on skis, so that's fine with me. Basic understanding of written Norwegian really helps as well, not having to ask anyone to understand your bank statements or tax papers makes you feel smarter and autonomous!

Some people don't adapt, and this really has been a big issue for the company. The turn-over on the team has been huge, most people came and stay one or two years top, and finally decided that Norway was way too cold, too dark, too expensive, or that Oslo was not exciting enough, too small, etc... Developing a product when sometime up to three persons have been working on the same subsystem one after the other, when you have to deal with 15 different nationalities, people with different cultures and native languages, large variability in the ability to use English for communicating, etc, ... that's quite an achievement don't you think?

Rise of the Godslayer
Of course some people actually like Norway. I'm one of these foreigners who managed to survive the dark and cold days of Norwegian winters, I took lessons to learn Norwegian - not that I really managed, but I tried at least -, I actually liked it so much that I managed to get two friends to join me to work in my team :)

We managed to get Age of Conan released, work has shifted on the expansion and on The Secret World, and there are enough things to do to keep the work interesting. In the mean time, Test Drive Unlimited and Alone In The Dark got released as well, still nice to find your name in the credits even if you were long gone by the time the game was finished!

On the personal side, I'm now living in my own apartment with my girlfriend, I had friends and family from France visiting few times, and I managed to make a number of friends and acquaintances in the country as well. So all in all I guess I don't have much to complain about.

I know that the grass is always greener and the sky always bluer in the places you are not, but when I consider France now from where I am, I really don't feel like coming back any time soon. I try to follow a bit the news by reading online versions of newspapers, and seriously I'm not impressed by the situation out there. I know the economic crisis has been impacting harshly quite a number of people (including my family and few of my friends), but the cherry on the cake is really the parody of government currently at the top of the BRF6.

I never really discussed that point with other expatriates, but I would be interested in knowing what Alexis, Cédric, Laurent, Lionel, Olivier, Philippe and others's opinion on that.

So here we are in 2010, I'm still in Norway, I still work at Funcom. The opening of the studio in Montreal has been a real success, and quite a lot of employees said they were interested in moving out there, so we can expect the new studio to have more employees than the Oslo office at the end of this year.

Personally I'm not interested in moving to Canada, I really enjoy Norway and I hope I'll be able to keep doing interesting things at work for the years to come. If I was interested in going to North America, I would have gone there in first place instead of moving to Norway :). For me staying in Europe is important, most of my friends are in a two hours plane travel radius, and if for some reason I have to go back to France for some emergency I can do it, even if Eyjafjallajökull decided to have some fun - I would just use a combination of train and ferries -.

Helping making the whole infrastructure work between three very distant locations was quite of a challenge, with many unknown factors and speed bumps - yes Oracle, I'm looking at you! -, but I guess we are not far from achieving that.

Internet is really what has made all that possible. Twenty years ago moving to Norway would have been an adventure. Now it's almost pain-free. You can find all the information, contact embassies, discuss in real time with people all over the world, ask advices to anyone, keep track of people using the social networks and blogs, etc...

So, I don't know what the day after tomorrow will be made of, but I sure hope it will look like a bright sunny road!

Tustna, a nice island in the center-west part of Norway
1. http://en.wikipedia.org/wiki/Demoscene is probably a good starting point↩
2. Hi to everybody at Eden Games and Ivory Tower↩
3. For some reason the CEO found it difficult to give me a salary 50 euros higher than the one his lead programmer had :)↩
4. Including suburbs and close cities↩
5. I managed to take one month of vacation during the summer just by spending my compensation time.↩
6. Banana Republic of France↩