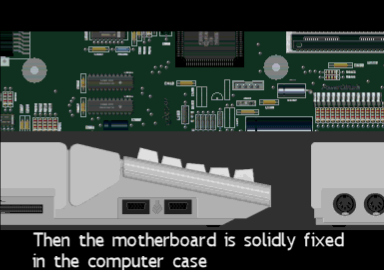 Save The Earth (Atari STe demo)
In 2005 I participated to the online demo competition organized by the group DHS (Dead Hackers Society). With other members of the group Creators we made the Conflict of Interest demo screen, and reached the 3rd position in the compo.

We are now in 2009, and yes 20 years ago - 1989 - this was the unveiling of the Atari STe. Time to do a new demo !
This time it's the group Paradox who decided to organized a mega demo on this theme, but unfortunately they enforced some pretty serious constraints, like a maximum executable size of 160kb. Considering the ambitions I had, would definitely not fit, so I decided to go my own way and not participate. (You can still check the official forum if you are interested.)

So I started something different. I wanted no obvious effects, but still something technical. The reason is that most people nowadays have no idea about the technical limitations of old-school machines, and they will tend to dismiss something that looks ugly (compared to other things they can relate to), even if it is technically incredible. On the other hand if you do something containing only design and graphics, you will disappoint people who know the ins and outs of the machine.

The solution? Well, I tried to do something with a lot of graphics (simple style to avoid showing the obvious limits of the machine), transitions, synchronization with the music, the whole being displayed in left and right overscan to simulate wide-screen format with one palette per scan-line to give the technical edge to satisfy people.

Add a bit of humor (without being silly), some information (most people never saw an Atari STe in their life, after having watch this demo they will know what it looks like), and some gentle ass kicking at the end :)

In the end I did all the code of Save The Earth, most of the graphics (CRem from MJJ Prod made the sprites for the Defence Force logo, and Elitar made the truck), and Excellence in Arts made the music. Thanks to him for helping pushing the demo forward toward the end, because I was really starting to feel the exhaustion!

I was not quite sure of how well it would be received, but a majority of people enjoyed it. I made only the first place at the demo competition at the Kindergarden party, but that's ok, not easy to compete against PC demos :)

You can watch the demo either on a real Atari STe or MegaSTe (with at least two megs of memory), or watch it on youtube:


You can download the demo on pouet.net or vote for it on Atari Mania.

Hope you liked it!

Edit: It appears that the demo has been reviewed in a disk-mag, so I will add some of the links I find there: