The first thing we did of course is to try to start it. Nothing happened. The blinkers and windshield wipers worked so at least we knew there was electricity going on, but since starter engines are notoriously power hungry we decided to buy a battery charger, remove the batteries, and let them charge for quite a long while.

In the mean time we ordered some replacement spark plugs and a new set of distribution cables1 and additionally an original user manual for the vehicle.

After one day, one of the batteries was still not done charging; that's not a good sign. The previous owner probably never changed them since he had the vehicle, and we were planning to change them anyway. Still we reinstalled them and tried to start the engine. Still no luck.

Patience is a virtue

Few days after we ordered the plugs we got a phone call from the company asking us if we wanted the military or civilian models. We answered we wanted the civilian ones, but I have to admit that I had this annoying nagging feeling telling me that we made the wrong choice.

The important thing here is to consider that this was a military vehicle originally equipped with a field radio transmitter. These things do not like interferences, specially not from the engine electrical system. To solve this issue they equipped the feltvogn with shielded covers for the distribution head, shielded spark plugs, and special shielded cables. These of course are totally non standard, which make them more expensive and harder to find on the market. 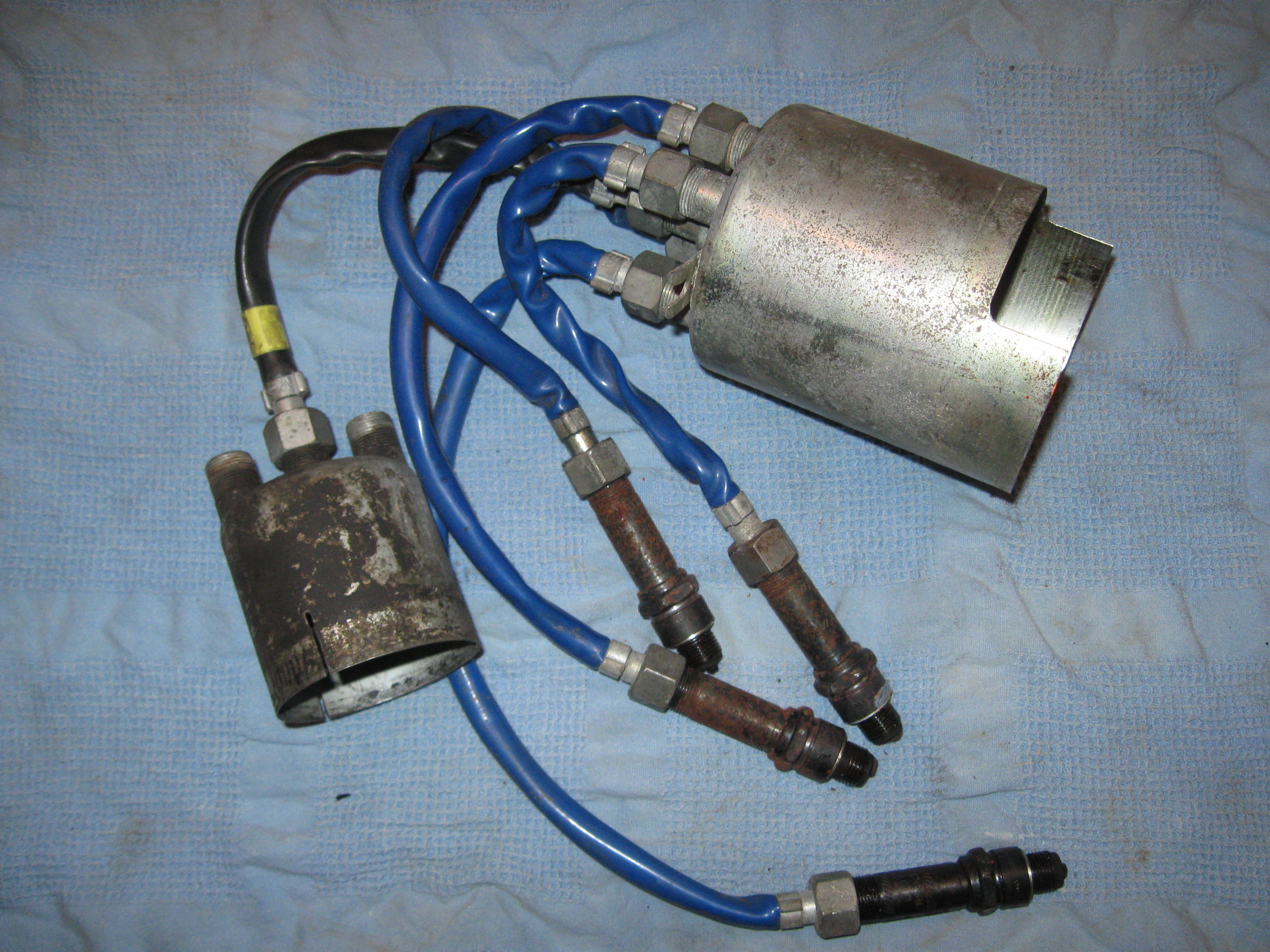 Shielded spark plugs
Of course, the added shielding made it impossible to use a standard spark plug removal tool because the head part was not deep enough. Fortunately we managed to find a tool that worked2.

Anyway, after carefully cleaning the top of the engine to remove the dirt and other organic mater we managed to remove each of the old plugs and replace them by the new ones, making sure we did that one by one to not get the cable order wrong.

We also decided to replace all the battery cables, and to upgrade the original batteries from 45 Ah to 62 Ah3. 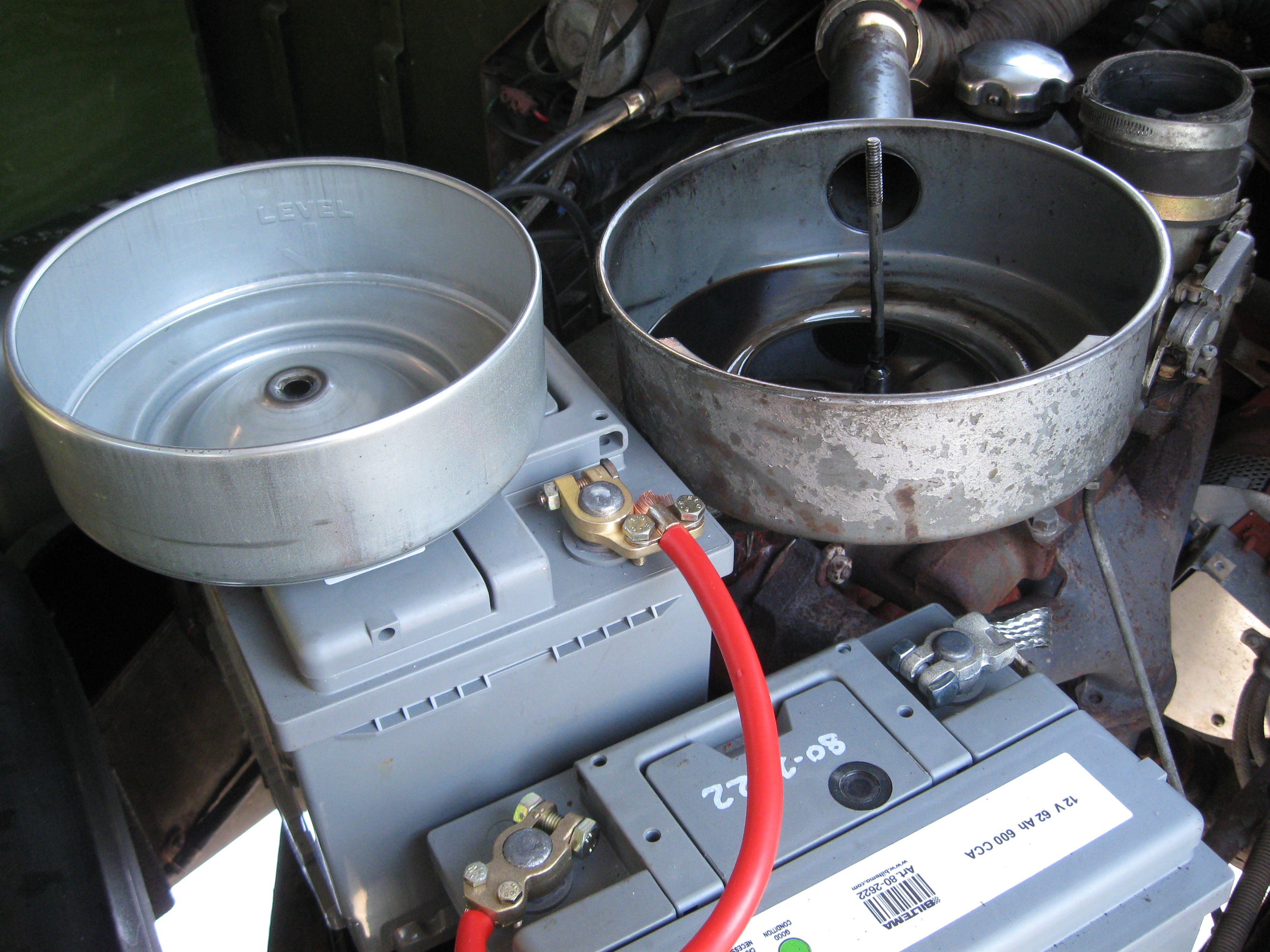 New batteries and cables
While I was at it I spent some time cleaning the air filter4.

The moment had arrived: Will it work?

We turned the key, and pressed the start button.

All we heard was a clicking sound, accompanied by a little bit of smoke.

There was obviously something wrong, but after checking the lights and wipers it seemed at least that the main electric system was still there, and no fuse had blown up.

At least I knew what this clicking sound was: It's the solenoid which is in charge of moving the starter's gear in position so it can launch the main engine.

What it means is that the starter was correctly receiving the current when we tried to start the car, but only one half of it was working, the starter engine itself did not start rotating.

Using a small light torch we try to see if something was wrong with the electric cables leading to the starter engine, and this is when we got this “a-ha” moment: There was a short circuit, which explained both while the engine would not start and why there was some smoke.

What happened is that when the previous owner removed the shield casing of the distributor head, he did not fastened the metal rods used to screw the head, and as a consequence one of the rod decided to fall on the closest thing: The starter engine connections.

We managed to remove the rod, and tried to start the engine again.


As you can probably hear on the video, the thing is not particularly silent, but the main cause is that the exhaust is rusty and punctured.

Hopefully changing it will help a bit.
Here comes the leet-mobile!

1. it never hurt to have these changed because they tend to get porous over time and that leads to bad conductivity in wet weather↩
2. Search at Biltema, they have long ones, make sure to pickup a 21mm model↩
3. There was not much space left, but they fit and you can still close the engine box after that.↩
4. A fancy system using oil in a basin to trap heavy particles.↩